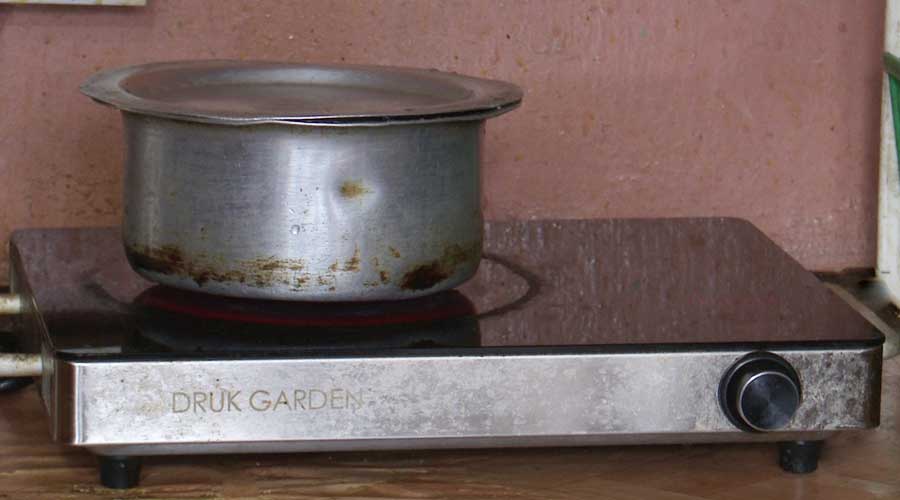 From using firewood to Liquefied Petroleum Gas or LPG to the electric cooking stove, Bhutan has come a long way in terms of clean energy consumption. Although some rural households still use firewood, many have switched to better and healthier cooking options over the years. An increasing number of households are now using electric cooking stoves helping the country achieve its clean and affordable energy goal.

One of the electric stove users is 73-year-old Kencho Dem from Haa who lives in Thimphu. She started using the infrared cooking stove last year. According to her, using an electric stove is not only convenient but also safer for her health.

She added, in the past, her son used to change LPG cylinders frequently every month, which is quite expensive.

“Electric cooking stove is very helpful. It is also convenient for me. We don’t use gas much now. Once we change LPG, it lasts for almost a year now. Since I am in the kitchen most of the time, I use it every day. Using LPG is quite dangerous as we might burn ourselves but for the electric stove we just have to switch on and turn off the electricity.”

Druk Garden Home Appliances, one of the country’s main dealers, started the idea of supplying electric stoves in the country in 2018. The company distributed more than 30,000 infrared stoves across the country over the last five years.

Initially, due to a lack of awareness, they could sell only about 3,000 stoves in a year. However, the numbers have increased to about 8,000 in a year now.

“Now, I think, the users have increased since they are aware of its advantage. It can be a substitute for LPG gas, it’s cost-saving and it’s a one-time investment as the electricity consumption is very less,” said Sangay Lhadon, Druk Garden Home Appliances.

According to the Department of Renewable Energy under the Ministry of Economic Affairs, using an electric stove emit almost zero carbon compared to firewood and LPG. Moreover, it is a sustainable option in the long run.

“The LPG is a fossil fuel, and while it can be considered a cleaner option compared to using fuelwood or even coal, it is still a fossil fuel and has associated carbon emissions. Because it is a fossil fuel it has a limited supply. And if our use of LPG keeps increasing eventually the source will run out. So, that’s why we feel that switching to an electric cook stove is a better option,” said Dechen Dema, Executive Engineer of the Department of Renewable Energy.

The department initiates various advocacy programs across the country to reduce the reliance on fossil fuels.

As per the Bhutan Trade Statistics 2021, the country imported about nine million LPG cylinders worth more than Nu 450 M mostly from India last year.