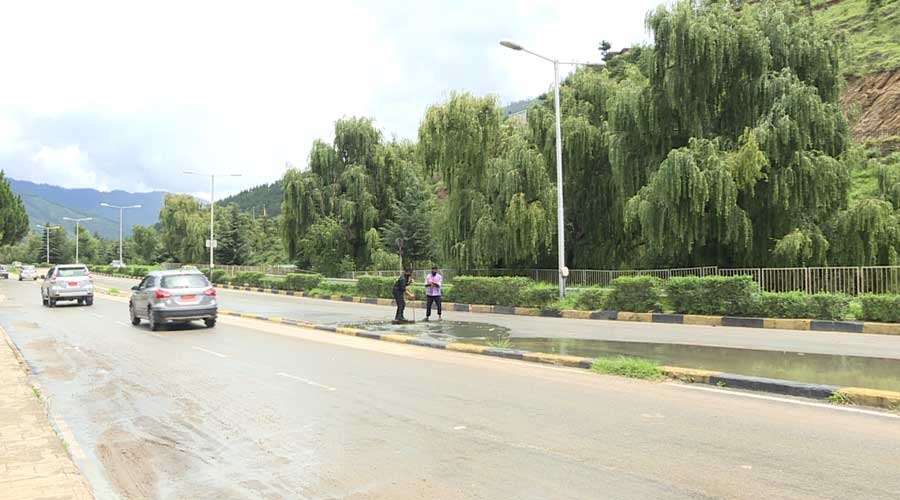 The issue of overflowing manholes or sewer lines in and around Thimphu Thromde is as old as the city itself. It has been under the media scanner for decades for being a cause of much inconvenience to the public. The issue is more apparent during the monsoon.

The manhole opposite the KayDee Auto Carwash overflowed during the recent downpour in the capital. It almost inundated the entire portion of the road, making it difficult for motorists and pedestrians to use the road.

Likewise, the road next to the taxi parking area in the main town was flooded a few days ago. The parking lot near the Centenary Farmers Market mirrored a similar issue.

According to the residents, such sightings not only look filthy but also produce an unpleasant smell.

“During rainfall, the places here are filled with rainwater since there are a lot of potholes here. Some young drivers speed drive the cars, splashing dirty water all over us, whereas the adults are a little mindful. So, it bothers us a lot,” said one of the shopkeepers in the core town area, Singyel Dem.

“With the clogging of drains, it’s difficult for people to get inside their cars. While getting out of the car, their shoes get dirty as well. So, it would be grateful if the government could look into this. There should be a proper drainage system,” another shopkeeper in the core town, Tenzin, raised his concerns.

“Once my shop was flooded with rainwater, and all my clothes and stuff inside got wet, so I relocated my shop. The situation today hasn’t changed much, it’s the same here,” said Dolay, who also runs a shop in a disappointing tone.

Some residents said overflow of sewer lines can pose health risks to the public. And amid a pandemic, ensuring clean surroundings are a must.

“Such collection of dirty water might become a breeding area for mosquitoes, which will cause malaria and other diseases. Since a lot of people go from here, it’s also an eyesore for them,” shared one of the residents in Thimphu Thromde, Nima Lhamo.

The Thimphu Thromde, in its email response, said overflowing of sewer lines occurs due to the irresponsibility of the residents.

They said releasing rainwater from the buildings’ gutter to the sewer tank and flushing sanitary pads, cloth pieces, kitchen wastes and debris clog the main sewer pipe. This causes the manholes to overflow, especially during the monsoon.

However, the Thimphu Thromde office is now determined about fixing the problem.

In a telephonic interview with BBS, Thrompon Ugyen Dorji said they have notified the building owners to avoid draining rainwater from the gutter to the sewer system.

Thrompon said they will inspect the buildings after a month or so, and impose fines on those, who haven’t heeded the notification.

Thrompon also shared plans of replacing sewer lines along the Norzin Lam since they were constructed more than 30 years ago.