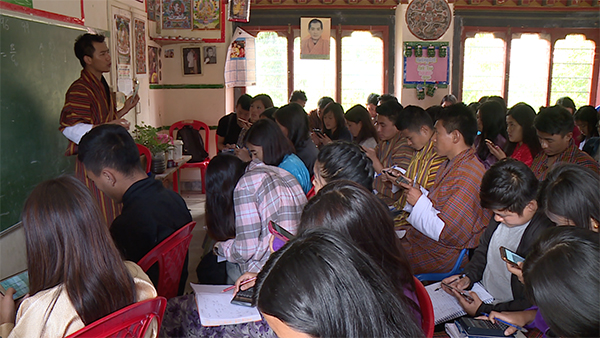 A trainee at the RIM, Ngawang Tobgay, and Tandin Dorji, who works with NPPF, conducted free coaching for university graduates preparing for the 2017 BCSE Preliminary Examination.

This is the second year in a row that the two teamed up to provide free classes. This time, some 700 university graduates attended the coaching conducted at the Jigme Namgyel Lower Secondary School in Thimphu over the last two weeks.

Ngawang Tobgay shared that he met a graduate last year who was not able to pay for courses offered to prepare university graduates for the preliminary examination. This, he said inspired him to come up with the idea to provide free classes. “I then discussed it with my friend, Tandin Dorji, who jumped on board right away, and this is how we started the initiative,” he said.

Kinzang Choden is one of the university graduates who attended the free classes. “Coming from a humble family, I cannot afford to pay for classes,” she said. Kinzang added that the coaching has been helpful.

Kinga Dhendup, another graduate, said learning with others was effective and that he gained a lot of new knowledge and experiences.

Almost all the graduates who attended the coaching classes offered by Ngawang Tobgay and Tandin Dorji last year are said to have performed well.  Considering the success of the initiative, the two are planning to extend the initiative to two more dzongkhags by next year.

They are also looking at introducing a bus service. “Many could not come to the class even after they registered since they live far away,” said Ngawang Tobgay.

More than 3,800 graduates have registered for the preliminary examination, which will be held on August 6.