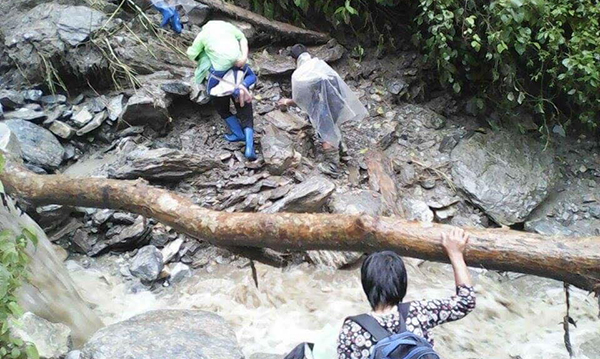 Dorona Gewog in Dagana, one of the most remote gewog has remained cut off from the rest of the dzongkhag for over a week now. Following heavy monsoon, its gewog connectivity road has been blocked. 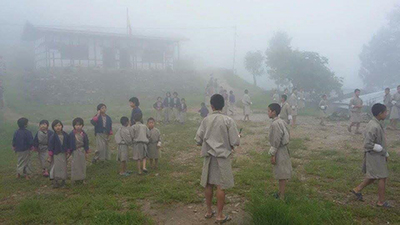 Around 24 villagers came together to help Nyimtola Primary School to transport the school’s food supplies, taking them eight hours to reach the supplies to the school. The school principal is looking for other solutions should the situation continue. The food stock is expected to last only for about 12 days. There are 152 students studying in the Nyimtola Primary School.

Meanwhile, a landslide in the gewog damaged a single storied house. The affected received Nu 10,000 as semso from His Majesty’s Kidu Office.

In Wangdue Phodrang, the rainfall is causing threat to some people in Kamichhu after the swollen river washed away the retention wall on Monday.

The issue is being put up to Punatshangchhu project authority and the dzongkhag administration.

Meanwhile, four taxi drivers have been penalized after charging exorbitant fare to passengers travelling to Phuentshogling. The drivers were penalised in Tsimasham in Chhukha.

While mitigation works to contain the flooding in various parts of the country continue on a remarkable note, the Department of Disaster Management feels there is a lack of proper coordination among the media and relevant agencies in terms of information sharing.

The Bhutan Telecom will also be involved to reduce network congestion so that information can be share on time.

In Thimphu, people living alongside the Wangchhu River are also worried about the rising level of Wangchhu River. Officials from the Hydromet services however said the water is still below the danger level and that it is being monitored daily.

There are no early warning systems installed along the river today. Officials however caution the people to be aware of the risk and to take immediate actions should they feel the river poses a threat. 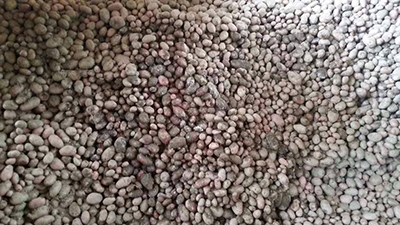 Due to incessant rain, around 260 truckloads of potatoes were damaged in Chapcha Shemagangkha Chiwog in Chhukha. They belonged to 115 households. Samples of the damaged potatoes were sent to the national plant protection centre for analysis.

Southern parts of the country experienced power disruption due to incessant rainfall. Major damage to power lines was caused in Samdrup Jongkhar, Samtse, Phuentshogling and Gelegphu, according to Bhutan Power Corporation.

BPC Managing Director, Gem Tshering said, minor disruptions are reported in most places but the worst hit is Samdrup Jongkhar, Samtse and some parts of Phuentshogling and Gelegphu. The high frequency lines used to transmit power to India are not disrupted by the monsoon.

In the meantime, efforts are still underway to clear the roadblocks along the national highways across the country. While some blocks where cleared, others still remain blocked.

More than 10 roadblocks were reported along the Tingtibi-Gomphu Highway. Gewog center roads and bypass roads in Zhemgang were also blocked due to rainfall and landslides.

In Samtse, two more roadblocks were cleared in Dorokha Dungkhag. The realignment work has also begun for the major block at Yabala. It is expected to be complete by today evening. For now, people are carrying goods on their back to reach the road point. 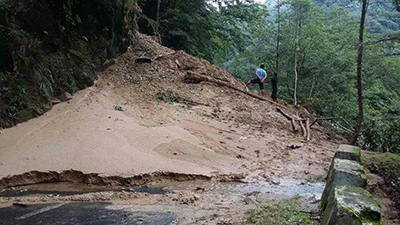 In the central part of the country, a bridge at Korphu, which is located 90 kilometres from Trongsa towards Zhemgang, has been damaged.

In Tsirang, the road block at Thangray, 18 kilometers away from Tsirang towards Sarpang, has been cleared after 18 hours. Meanwhile in Dagana, Bedilum and Chengala roads has been cleared. However, machineries and men were deployed at the site.

Meanwhile the Gasa-Punakha Highway is now open to traffic now. Earlier this morning, three roadblocks were reported along the highway. 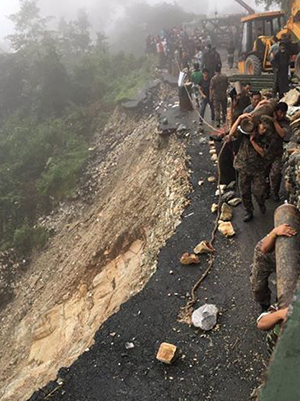 Bhutanese army and volunteers carried 350 oxygen cylinders on their backs across the roadblock at Kamji in Chhukha. It helped the patients at the National Referral hospital.

Two trucks transporting the cylinders were stuck at Kamji after some portion of the Thimphu-Phuentshogling Highway was washed away. It led to an acute shortage of filled oxygen cylinders supply in the National Referral Hospital. The hospital conducted only emergency operations and used stock from Paro, Punakha and Gidakom.

His Majesty The King, accompanied by the Prime Minister visited the site of the road damaged near Sorchen on the Thimphu-Phuentshogling Highway to inspect the progress on the construction of the Bailey bridge. To expedite the work, 50 RBA personnel were deputed to help DANTAK.