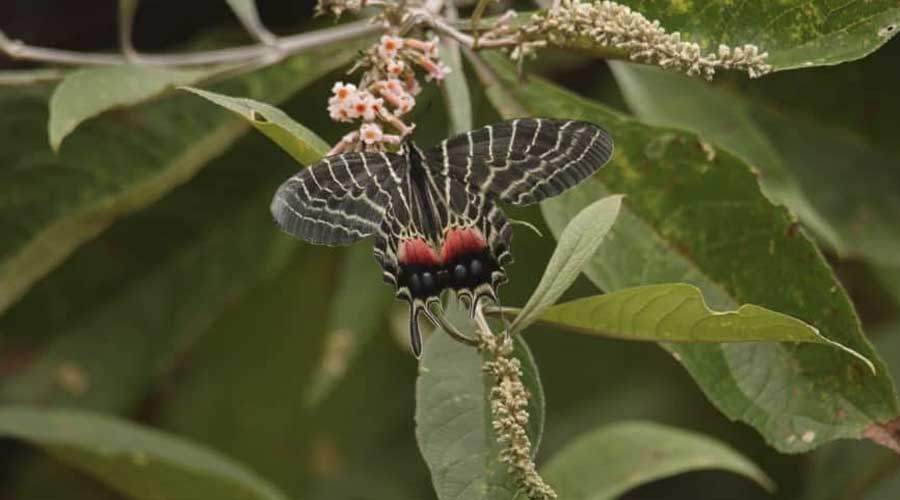 In what might come as a source of tourist attraction, Bhutan’s national butterfly can now be sighted in Trashigang. A Bhutanese bird watcher and photographer spotted the butterfly for the first time at the Shoskum hill area between Khentongmani and Khaling Gewogs.

Listed vulnerable under the International Union for Conservation of Nature, Ludlow’s Bhutan glory is usually found only at Bumdeling Wildlife Sanctuary in Trashi Yangtse.

A video of the national butterfly Ludlow’s Bhutan Glory was captured along the road between Khaling and Khentongmani. A bird watcher took the video last month. It was the second time he spotted the butterfly in the area.

Not just that, the area also hosts Bhutan Glory, another butterfly of the same species.

The bird watcher who spotted the butterflies said the area which is close to the Yongphula domestic airport could become a tourist hotspot, especially for tourists interested in butterfly watching.

There is not much disturbance to the butterfly’s habitat with just a handful of herders residing nearby.

Karma Wangdi, an assistant researcher with the Ugyen Wangchuk Institute for Conservation and Environment in Bumthang confirmed that it was Ludlow’s Bhutan Glory. Karma Wangdi identified it as the National Butterfly in 2012 because of its beauty and rarity.

“Right after we got the picture from him, I compared it with my picture of Ludlow’s Bhutan Glory and referred to the literature. I even observed the wing pattern and tail and referred to a few specialists in other countries.”

He added that UWICER is writing a project proposal in collaboration with India to seek funds from the National Geographic Society to initiate a conservation programme for the national butterfly.

“We have a plan to celebrate the butterfly festival in Tashi Yangtse, through that we can create awareness to the public on the importance of preserving the host plant and nectar plant.”

He added there are also plans to study the life cycle and train local tour guides as part of conservation efforts if they get funds and approval from the government.