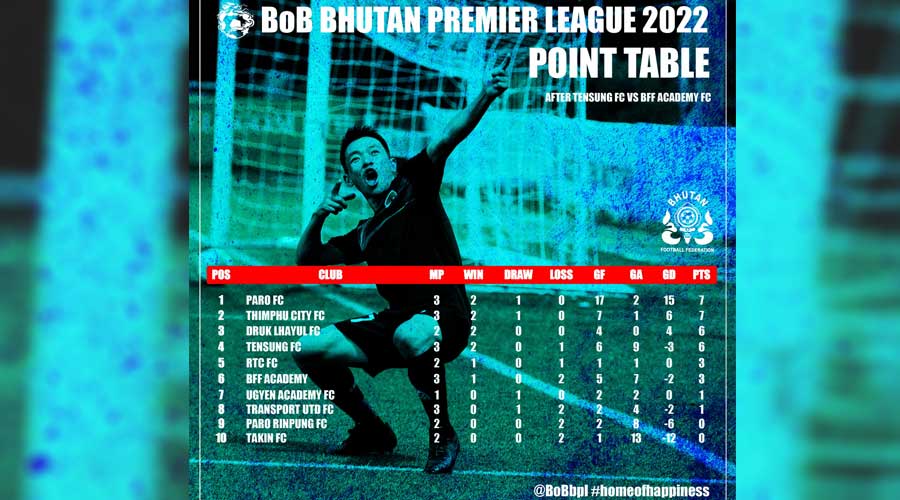 Paro FC lead the ongoing BOB Bhutan Premier League followed by Thimphu City FC, with the two teams separated only on goal difference. The top two teams have seven points each from three matches played. The two teams clashed on Friday, last week with the match ending in a 1-1 stalemate. In the latest match played on Sunday, Tensung FC defeated the young BFF Academy squad 3-0 at the Changlimithang stadium.

The defending champions Paro FC have scored an astounding seventeen goals so far in the league. The team scored eight goals each in the first two matches.

Their foreign striker, Kazuo Homma, is also the leading goal-scorer in the league. The Japanese international has six goals of which five were scored in the first match played against FC Takin.

Thimphu City FC also have seven points from three matches but sit in second place only due to having scored less with seven goals so far. The team, however, has a slightly better defensive record having conceded only one goal in the league so far.

Meanwhile, Druk Lhayul FC, who are in the third position have also started their game with a bang with two wins in two matches. They have also not conceded any goals so far.

And, in the bottom half of the league table, the BFF President’s Cup champions, Transport United FC are struggling without a win yet.

They are among the bottom three with the likes of the newcomers FC Takin, and Paro Rinpung FC.