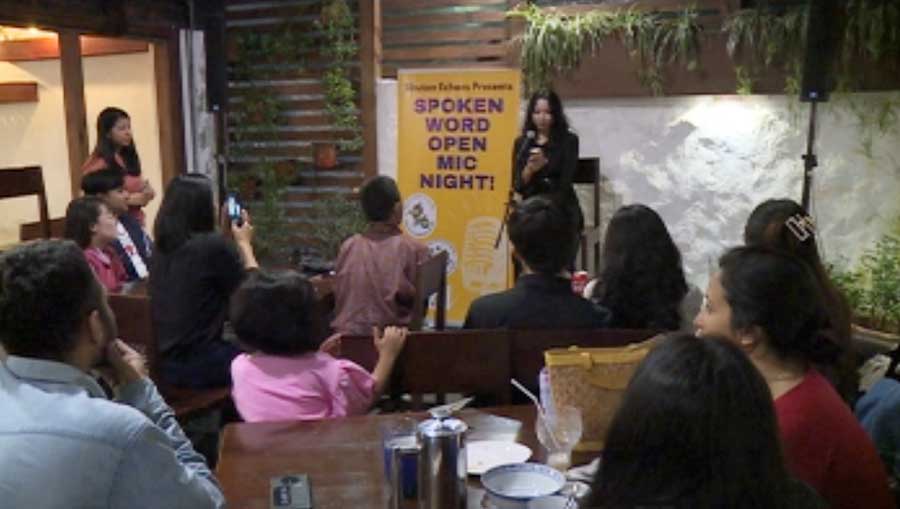 Drukyul’s Literature Festival, which was previously known as Mountain Echoes Literary Festival, is currently in its 12th edition. It strives to foster literature and intellectual community in the country by creating a platform for budding writers, youth and individuals, who want to gain prominence in the literary world. The festival was launched in August 2010 through the Bhutan-India initiative. Its Royal Patron is Her Majesty the Queen Mother Dorji Wangmo Wangchuck.

Apart from the annual literature festivals, the monthly programmes were initiated last October to reach out to individuals from the diverse age group in various parts of the country, who are passionate about literature, arts and culture.

For this month, an event was held at Project ZZA in main Thimphu town on Saturday. Titled “Bhutan Echoes Spoken Word Mic Night,” about 13 enthusiastic writers showcased their creativity.

“This provided an inclusive space for expression and celebrated young people’s voices and talent. Two recent debut authors, Yeshey, who is the author of Embrace, and Seeta Maya Rai, who is the author of Seasons and Senses were also featured,” said Kitso Pelmo Wangdi, producer of the monthly programmes of Bhutan Echoes.

Youngsters like Pabith Man Rai, a student from Dorokha Higher Secondary School in Samtse turned up at the event. He described it as an enriching experience, further motivating him to read and write.

He recently published his maiden book entitled “From Bud to Bloom.”

“I started reading when I was a third grader. I loved reading fairy tales and adventurous books. As I advanced to higher grades, my interest tilted towards reading worldwide renowned literature, especially those of William Shakespeare. He is my favourite author/writer. His artistic words encourage me to write more,” shared Pabith Man Rai.

Another student, named Seeta Maya Rai from Peljorling Higher Secondary School in Samtse also promoted her book- “Seasons and Senses” at the event.

“Today, I recited a poem called “I am but a hopeless lady.” This is part of my book. Since I come from a modest background and have endured hardships, I took solace in writing and that is how I inculcated an interest in writing and reading,” she continued.

The literary festival, which was otherwise graced by internationally acclaimed writers, poets, cinema genius and scholars, localised its content in 2020 due to the COVID restrictions.

“Given the challenges of the world recovering from COVID, we decided to host the festival virtually. We took this as an opportunity to focus on local writers, readers, artists and young people,” said Kitso Pelmo Wangdi from Bhutan Echoes.

“Despite hosting the festival online, we were still able to engage with our international speakers like Matthew Richard, Avni Doshi, Sandra Postel, Kabir Bedi and many more,” added Kitso Pelmo.

The annual Drukyul Literature Festival and its monthly programmes are produced by Bhutan Echoes. It is a not-for-profit organisation that coordinates and produces events to promote literature, culture, and art in Bhutan.