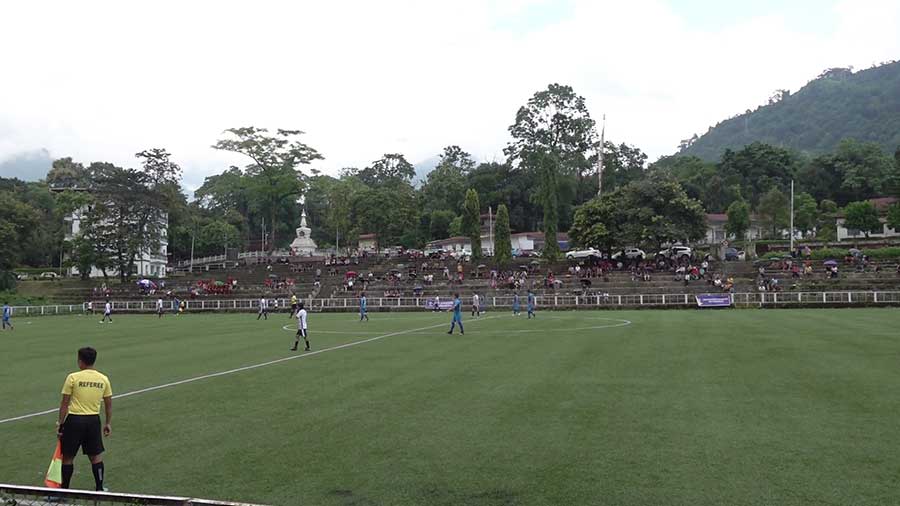 After more than two years of restrictions, football is finally back in the country and is bringing back people together with numerous tournaments being organized all over the nation. Besides rekindling the love and passion for football amongst lovers of the sport, the ongoing Open Football Tournament in Samtse is helping the district to come to life again.

On match days, people slowly start to gather at the Samtse football ground to watch a game of football. For football lovers in Samtse, this has almost become like a ceremony these days.

Whether it is a scorching hot day or there is a sudden heavy downpour, spectators continue to stay on and watch the game. It seems nothing can dampen their enthusiasm.

One of them is 59-year-old Tshering Dorji. Once a football player himself, Tshering claims to have not missed even a single game since the tournament started earlier last month.

“The match starts by 4:30 PM and I make sure to come here before that every day. Be it Saturday or Sunday, I always come here. So far, I think I have been a regular and maintaining a good attendance here,” he said.

He added the tournament is not only helping bring back the love for football in the district but is also a good opportunity for the youth.

“I think such a tournament will help our youth gain more experience and keep them engaged. And I believe such tournaments should be held every year for the betterment of the youth,” he said.

Likewise, the tournament has also helped in bringing other benefits to the community.

“After a long time, the tournament has become a source of entertainment for us,” said Pabitra Tamang. “Likewise, it is also a plus point for the business community here as they can make a good income through the tournament.”

“I think the tournament has also helped inspired many young girls and women here in Samtse. Right after the match, we see a lot of them coming to the ground and enjoying a game of football,” said Kinzang Cheki.

For now, 26 teams from Samtse are taking part in the ongoing tournament.

Tashi Jamtsho, a member of the Samtse Dzongkhag Sports Association says they received about 30 applicants for the tournament, “but we had to screen out a few of the teams. The motive behind it was to give opportunities to sports lovers in the district.”

As of today, the tournament is almost done with its group matches and advancing into the knockout stages. The tournament is expected to conclude this month. However, going by the response the tournament has received from the residents and the positive impact it is making, it is reassuring to say that the love for football in the district is not going anywhere.