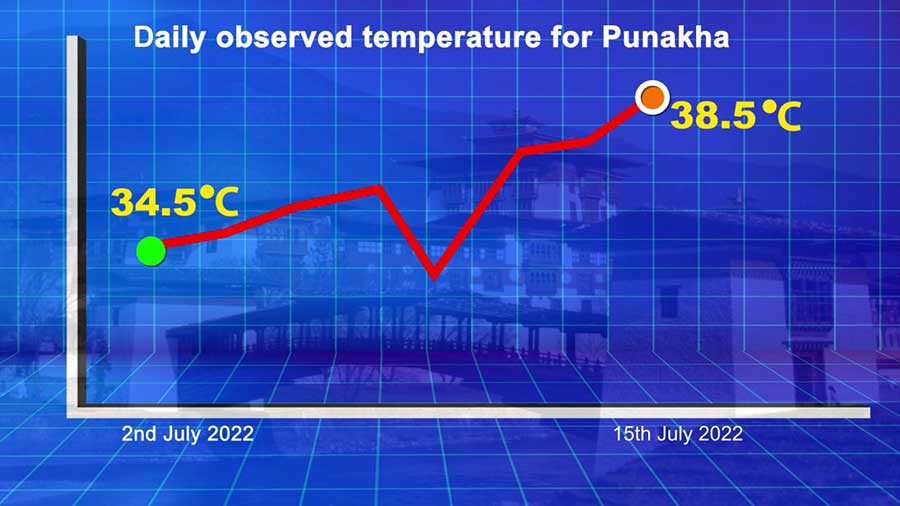 Many around the globe are feeling extreme heat this time around. It is no different for Bhutan. The country recorded historically the highest temperature of 38.5C in Punakha yesterday. This is 0.5C higher than the historical temperature which was also recorded in Punakha in 2019.

According to the National Centre for Hydrology and Meteorology, the country recorded an average temperature of 25.6C for July from 1996 to 2021.

Tshering Lhamo, a Meteorologist with the National Centre for Hydrology and Meteorology said the maximum daily temperature over the last two weeks is higher than the historical average by about 2.6C.

“However, we cannot pin it entirely on climate change. There is natural variability in the atmosphere that can cause such conditions.  So we know that right now is the monsoon season and currently we are experiencing a break in the monsoon season. So, this break is caused by the low-pressure system and this system is causing the monsoon winds to deviate from their normal pathway. And there is also the monsoon trough which is not in its normal position.”

Meanwhile, the temperature is expected to gradually drop starting tomorrow. This drop is likely to bring rainfall sometime in the coming week

As per the international media, it says, heatwaves are starting earlier and are becoming more frequent and more severe as a result of climate change. The Intergovernmental Panel on Climate Change projects that for 1.5C of global warming, there will be increased heat waves, longer warm seasons and shorter cold seasons.