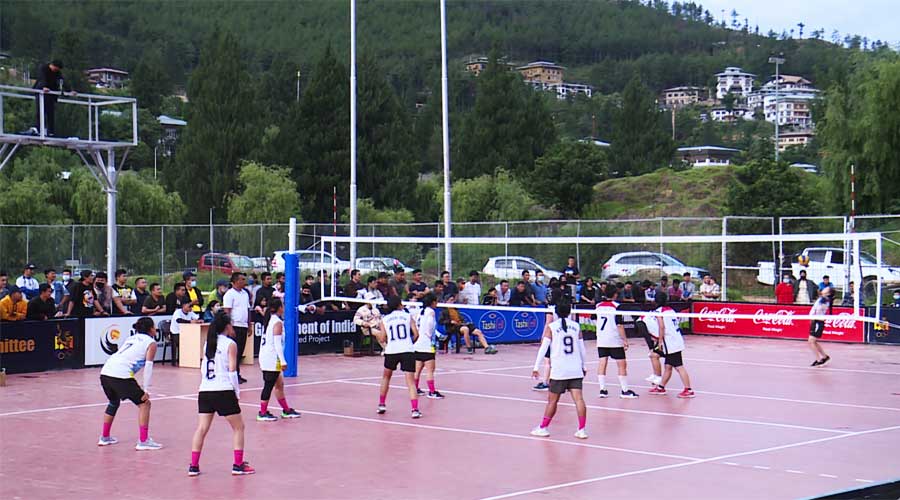 Just as men, women are also setting the bar high in volleyball. With the establishment of infrastructure, volleyball has steadily developed recently with many people taking interest in the sport. In the finals of the 2022 Women’s Summer Volleyball Championship, ‘United Ladies’ defeated ‘Highschool Friends’ yesterday in Thimphu. Players, mostly young women, attributed the team’s success to their passion for the game and to their team spirit.

In a set of 5, both the teams won a set each in a very close match. The match kept the spectators on their toes when the young women displayed their talents and skills on the court. Each spike was cheered on by the crowd. However, ‘United Ladies’ won two more sets in the following matches and won the match.

“We have won and I am delighted. Most of our players are very good and talented. Even before the match, we talked amongst ourselves, and we convinced ourselves that we will win. We practised in many different courts before the championship. That is why we won,” said Tshering Dema, a player of the United Ladies.

Meanwhile, the runners-up team also had good players and displayed professionalism during the entire championship but it was not their day.

“I am happy just to be able to participate in the championship. The match was competitive and we had so much fun. On the other hand, we are also sad because we lost,” said Kezang Tshomo, from the Highschool Friends.

According to the Bhutan Volleyball Federation, more women are taking up the sport in recent times.

“Since the construction of this court, we are seeing more women taking interest in the sport. And the court is also booked by women most of the time these days. The style of play has also improved a lot compared to the past. Even the spectators here today are surprised to see it,” said Pema Dorji, the Assistant Coach of the Bhutan Volleyball Federation.

The winners took home cash prizes along with trophies and medals. A total of 16 teams from various districts took part in the two-day championship. The men’s summer championship is also set to begin next week with a huge number of 28 teams.