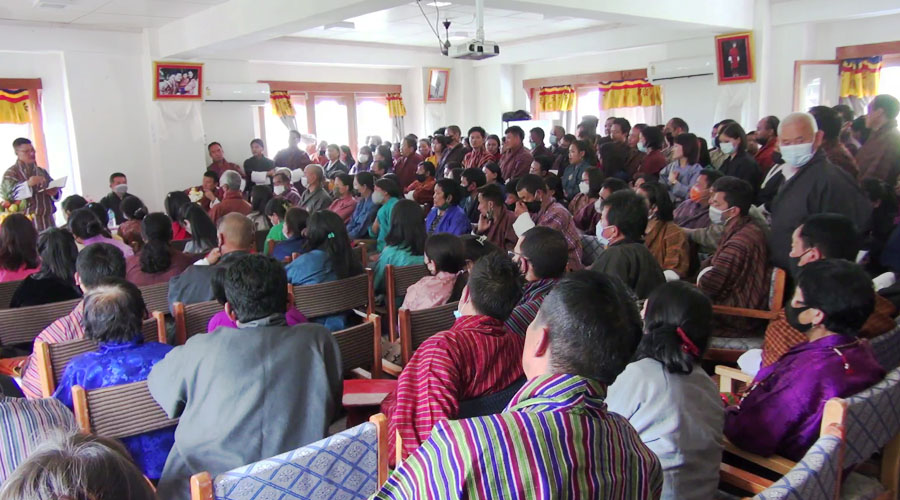 Hoping for intervention to elevate their business prospects, people doing businesses in the far-flung Gewogs of Phobji, Gangtey and Daga also came for the meeting. Their hopes were cut short as soon as the meeting started. This is because some business owners started questioning the officials about the election of the office-bearers of the Dzongkhag Business Development Committee. The election was conducted in May last year.

They alleged that the chairperson and the members of the DBDC were elected without the consent and consultation of the business community.

“Let the entire business people here cast their votes by giving them equal opportunities to elect the chairperson and members of DBDC. Likewise, let the aspiring candidates come forward. It would be only fair if the opportunity for re-election is given,” said Kuenga Dorji, in Bajo.

Others also alleged that the election of the chairperson and members of the DBDC was not transparent.

“Whether they conducted a meeting or not, they should at least inform us through our Thromde Group. They should tell us if they receive any letter from the BCCI office,” said Tsagay, also in Bajo.

However, according to the BCCI, the election for the formation of the DBDC was done as per the process without any lapses.

“I could not do anything on this issue since the incident happened before I was elected as the President of BCCI. However, I have thoroughly reviewed the case and did not find any administrative lapses,” said Tandy Wangchuk, the President of the BCCI.

“I did not do anything wrong from my side. Of course, they have a right to object if I have committed any corruption. But I did not do that and I have been working for the last eight years,” added Tharpa Lhamo, the Chairperson of the DBDC in Wangdue Phodrang.

With this issue dominating the meeting, people who attended to get ideas and help to revive their businesses were ignored altogether. About 300 business owners in and around Wangdue attended the meeting.

“I came here thinking that we might be able to get some help to solve the problem of availing loans. But we could not get a chance to raise this issue after some businesspeople brought up a different issue,” said Tshewang Penjor, a shopkeeper.

“The meeting has been distracted by the allegations. So, none of the participants got chance to ask relevant questions nor they got an appropriate answers from the officials in the meeting,” said Sangay Daba, a member of the DBDC.

However, the president of the Bhutan Chamber of Commerce and Industry said the BCCI office will always remain open to the people who want to discuss business-related issues. Similarly, the business community in Wangdue was also asked to visit the office if they are still dissatisfied with the clarification.

There are more than 900 registered business license holders in Wangdue Phodrang.