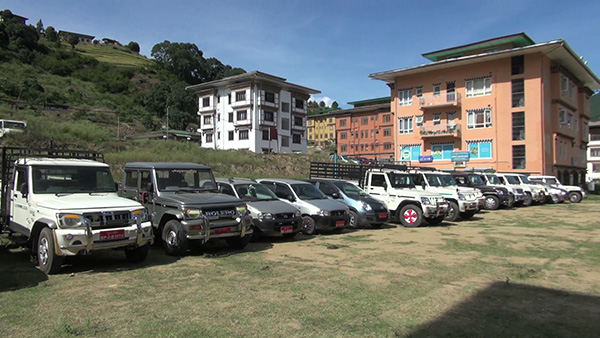 Punakha police arrested four women and a man suspected of Deceptive Practice and Forgery recently. According to the police, the suspects hired 23 light vehicles from different individuals and sold them by forging documents. Police have recovered the cars.

Police traced the vehicles to neighbouring districts after checking the Check Post Management System. The cars were recovered within six days after receiving complaints from the owners on the 11th of this month. One of the owners first lodged a complaint after he found a stranger driving his car in Thimphu.

According to police, the suspects have allegedly hired the vehicles from different people and sold them off at a cheaper price.

“They hired the vehicles from the owners and some of the suspects used the cars as collateral for informal loans. They also prepared fake documents and sold the cars. Some vehicles were passed over from a buyer to another and reached the fifth buyer too,” said Lt. Colonel Chador Namgay, the Officer Commanding of Punakha police.

“I hired out my vehicle for one month after drawing an agreement. They also paid a month’s hiring charge in advance. We made the terms and conditions to bring back the vehicle once to see its condition after a month and to draw the next agreement again. They kept in touch for some time but when the time came to renew the agreement I could not get my calls through to them at all,” said Kinley Dorji, one of the vehicle owners in Punakha.

Some buyers changed the ownership of the vehicles and even obtained registration certificates from the RSTA.

Police expect the number of suspects and cars involved in this scam to increase. Meanwhile, to avoid lawsuits, police urge the general public to be wary of people selling vehicles at an unreasonably cheaper price.

“It is a vehicle-related issue so far, but there is a high chance that similar cases involving properties like land will also come up. So, we would like to urge all to refrain from buying such properties without proper verification,” said the Officer Commanding.

Police are investigating the case. It will be forwarded to the Office of the Attorney General for prosecution once the preliminary investigation is complete.