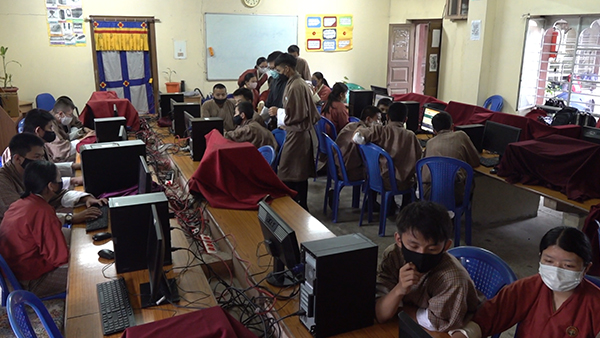 Despite coding or computer programming being a recently introduced topic in the Bhutanese education system, it has received a good response from the students. For instance, in Samtse, barely a year since the introduction of coding, students of Samtse Higher Secondary School developed about 11 mobile applications as part of their hackathon event this year.

The students have been staying back at the school after their normal classes to work on their respective mobile applications for the upcoming hackathon competition. At the IT lab, an ICT teacher helps them but he is rarely called upon.

On the day of the competition, students managed to make about 11 mobile applications starting from simple information sharing app to COVID-19 advisory apps.

Among them, Semkham, a counselling app with voice assistant and contact our counsellor features was announced as the winner for this year’s hackathon.

“We came up with this app, Semkham, as an alternative role of a counsellor. It has various features such as job search options, interview skills, self-care, a simple game and a quick dial option,” said Tsundu Palden, a member of the team that developed Semkham App.

Another member Karma Loday said “We have voice assistant features and we have used a lot of extensions like tips on how to go about your career concerning mental depression. It can give you important tips to deal with depression and anxiety. Likewise, it also contains information on job interviews and many more.”

“The reason behind calling it Shay Tshub was because the app contains a total of five different features. We have an online camera, QR scanning option, world map, weather updates, and important news,” said Lhazin Phuentsho Dema, a member of the team that made Shay Tshub App.

It took only about 14 hours for students to learn, explore and develop the mobile applications.

“We taught them very minimum. We introduced them to an online platform called app inventor. We only did the orientation and thereafter we asked them to explore themselves and simply guided them. And at the end of the hackathon, they were able to produce and make useable apps,” said Sonam Wangchuk, IT teacher with Samtse Higher Secondary School.

About one hundred students came forward to take part in the event this year but they had to bring it down to 40 students due to limited resources and capacity. They were all selected based on the ICT marks during the midterm examination.

The experts from Gyalpozhing College of Information Technology judged their works. And with the positive feedback and comments, students are only motivated to further improve their mobile applications.