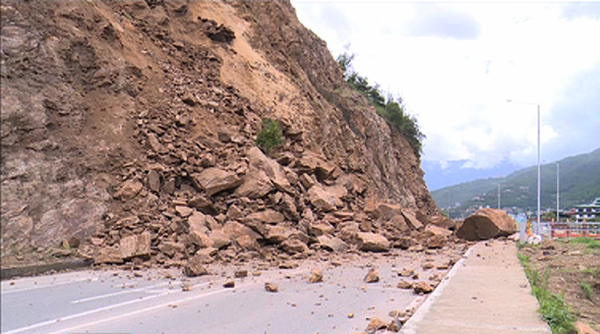 Being a mountainous nation, most roads in the country run along hills and cliffs. This means the roads are prone to landslides especially during the summer, making it risky for travellers. According to experts, carrying out slope management measures will prevent landslides. But in most cases, this is not done.

Recently, a massive landslide at Chhubachhu in Thimphu blocked the road for days. The Thimphu Thromde cleared the roadblock and even carried out a study. But the slope on the roadside remains the same, without any protection measure.

Like this, numerous incidents across the country are reported all the time. And similarly, the roadblocks are cleared and the traffic opened, till another incident takes place.

The Department of Roads (DoR) says currently there is no guideline that mandates slope protection measures when constructing roads.

At present, the safety of roads including slope management is looked after by individual organizations such as the thromde and district offices.

“So far we don’t have any standard or guidelines but as I have said, wherever required we provide basic countermeasures like walls and retaining structures. But to provide full-blown slope stabilizations, we don’t have guidelines” said Tempa Thinley, the Executive Engineer of the Geo-Technical Section under the Department of Roads. The DoR says budget constraints are another big hurdle.

The office had recently proposed for Nu 500 M. However, only about Nu 50 M was approved. A report with the department reveals that more than 300 slopes along the East-West highway alone need to be secured. And the amount approved is far too less to do that.

Tempa Thinley says there are different types of preventive measures like macro nettings and creep walls. But the department has not been able to carry out those techniques as they are expensive. But in terms of sustainability, he says they are permanent and it guarantees stability.

A few slope stabilization techniques were however done on a trial and all proved successful.

Along with road connectivity, ensuring the safety of the commuters is essential. Perhaps, it is time the government starts investing more in slope management before it is too late.