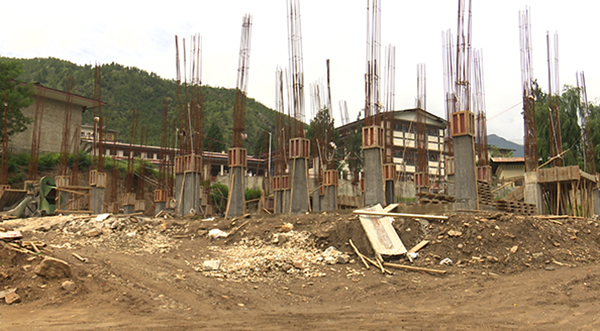 The pandemic has severely affected the construction sector in the country. The cost of materials has increased. There is also a shortage of labourers triggered by the border closure. Unable to meet the project deadline, they are pressured by the districts and departments despite the finance ministry declaring force majeure. Force majeure is a common clause in contracts that relieves a party from fulfilling the obligation due to an event beyond the control of the affected party.

Neten Wangdi, a contractor, was awarded a tender to build a staff quarter for a school in one of the districts at the beginning of 2020. Everything was moving smoothly until the country reported its first case of coronavirus in March. The border closure to prevent unchecked infections into the country impeded the supply chain of raw materials. His foreign workers started leaving for their homes adding to his financial burden. Failing to meet the project deadline, he is now under pressure from the District Administration.

“It’s not like we don’t work. We have been doing it continuously. We have been managing it with even fewer people. All we need is some time and we will finish the work somehow. But Dzongkhags and departments say our time is up and the budget will be returned to the ministry if we don’t complete the work within the financial year. If we can’t complete the work today, we can do it next year if we are still alive. We also have to bear the losses. They say we are doing nothing. Every month, we are struggling to pay our workers and maintain the machinery,” he said.

“The ministry has been very supportive. But what we don’t understand is that the Dzongkhags do not understand what the ministry has notified. In the past, we get the materials on credit. We pay up when the fund is released. But now, everyone wants cash. We requested for 35 per cent advance to continue our work. The government agreed on 20 per cent with a bank guarantee. If it’s 50 million worth of work, the bank guarantee alone takes six hundred thousand Ngultrum. Now when we thought we finally have a solution, around five departments came saying that it is unlawful. I don’t understand how they can question the decision of the ministry,” added Tshering Yonten, the executive director of the Construction Association of Bhutan (CAB).

The Finance Ministry has so far issued two notifications to address the issue. The first notification was issued last year granting a deadline extension without penalty. The second notification issued at the beginning of this year stated the rescheduling of the completion date for ongoing construction works between procuring agencies and contractors. However, the budgetary agencies are urged to ensure implementation of capital activities which will pressure the contractors to complete the contract works within the permissible limits and conditions. This, the statement says, will generate economic activities and revive the economy”.

Meanwhile, the CAB says they do not entertain contracts that have their deadlines before the pandemic.

“The pandemic started around February 2020 and they were supposed to complete their work before that. But they couldn’t do it and they blame the pandemic. But before we request the government, we first study the situation case by case and if their deadline was before the pandemic we don’t consider it. Some four contractors came to us and they also paid the penalty,” the Executive Director said.

He also added that contractors who got their contract after the pandemic are also not considered because they put a tender after considering the country’s situation.

Considering the unforeseen situations, a private lawyer says that there are elements that could justify the failure to comply with the deadlines and other clauses in the contract.

“There are three elements to consider a contract force majeure; the first is that event must be beyond the reasonable control of the affected party, secondly the affected party’s ability to perform an obligation under the contract must be prevented or impeded by such events, and lastly, the effect on the event cannot be avoided or overcome by reasonable effort to mitigate. If these three are there, it is considered an element of force majeure. This currently the government has declared. The COVID 19 has been declared one and from a law perspective, contractors should have the rights over it,” said Ngawang Tobgay, a lawyer.

As per the Contract Act of Bhutan 2013, section 87 and section 88 also has provision “frustration of contract” which is applied, when either party, without their fault, is incapable of being performed due to unforeseen event. As per the section, the parties to a contract may agree that the contract need not be performed.