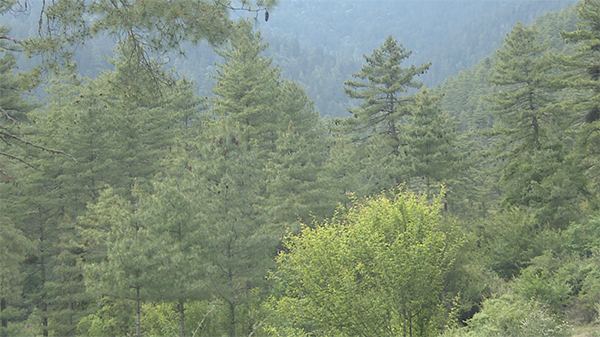 In what is defined as a good performance and positive contribution towards global climate change mitigation efforts, the country’s forests have the capacity to absorb 8.5 million tonnes of carbon dioxide annually. It is an increase from a little over 6 million tonnes in 2010. This is as per Bhutan’s National Forest Reference Emission Level and Forest Reference Level developed by the Department of Forests and Park Services (DoFPS).

Constituting 6.6 million acres of the country’s total landscape, Bhutan’s forests have the capacity to remove 8 million tonnes of carbon dioxide from the atmosphere annually. This is equivalent to 10 times more than the country’s annual emission that is estimated to be close to a million tonnes annually contributed by deforestation activities, timber extraction and forest fires. The total absorption capacity is calculated taking into account the sustainable management of forests, conservation and enhancement of forest carbon stocks.

The foresters attribute the increase to a slight increase in the country’s total forested area and largely to change in the method used for calculating the absorption capacity.

“There is only 0.1 million hectares increase in forest area so there is a marginal increase in total sequestration capacity. Secondly, the huge difference in the two figures is contributed mainly by the change in the definition of the managed forest when we estimated the sequestration capacity in 2010 and in 2020. In 2010, they assumed that only 50 per cent of the total forest of Bhutan is managed while we considered that the entire forest of Bhutan is managed,” said Dorji Wangdi, a Forester with the DoFPS.

Bhutan has always contributed more than its fair share towards the global fight against climate change. To continue the effort, the department of forests and park services plans to maintain the annual absorption capacity at 8.5 million tonnes per annum for all times to come. But it is a challenge for the department due to the increasing incidences of forest fires and deforestation activities.

“For a developing country like ours, we need to let the developmental activities continue. The development comes with a cost. For example, if you deforest about a hectare of the forest we would be emitting approximately 624 tonnes of carbon dioxide. So that actually contributes to huge emissions from the forest sector. Similarly, we also allot a huge volume of timber for various developmental activities including the bonafide timber use for rural house construction purpose. So that also contributes to the emissions from the forest sector. And then we have an increasing trend of forest fires. So we also need to manage forest fires and also to plant trees in non-forested areas. Planting is important but ensuring that they grow is more important,” he added.

The DoFPS submitted the Forest Reference Emission Level and Forest Reference Level to the United Nations Framework Convention on Climate Change for assessment. The report strengthens the country’s position and commitment to maintaining the emission level below the sink capacity of its forests. Bhutan has always emphasised the importance of adaptation and mitigation for Bhutan’s forests, given future climate change impacts on its mountainous ecosystems.