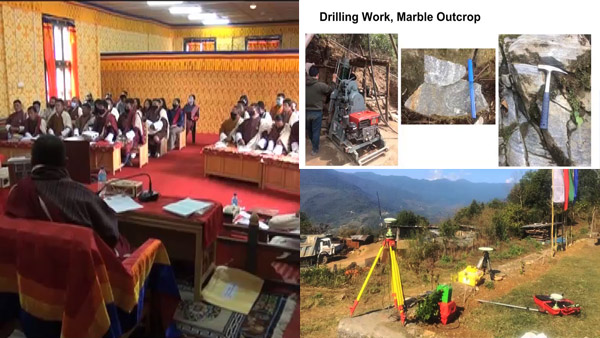 The Haa Dzongkhag Tshogdu (DT) yesterday decided to suspend the Department of Geology and Mine’s (DGM) research works on exploring marble reserve at Gakiling Gewog. The local leaders said the area that the department has been studying for possible marble reserve for the last two years falls atop Dorithasa chiwog which is prone to landslides.

“We have invited officials from the DGM and asked if they have to consult with either dzongkhag or gewog to seek approval for such works. The officials said according to the Mines and Mineral Act 1995 they need not seek approval for preliminary research and so that’s why they have been working on their own for two long years now. The people, worried about the consequences, approached the dzongkhag following which the dzongkhag wrote to the ministry to halt the research works,” the DT Chairperson, Thinley said.

“We are happy that the DT resolution is in our favour. We will convey the same to the people as the request came from them. It is mainly because there are probable threats that could disturb our water sources and damage the Haa-Samtse highway which passes through the area. Moreover, we believe our deities reside in that area so we fear negative consequences if we disturb the deities. That’s why we request for the suspension,” added Gakiling Gup Gashey.

The Director-General of the DGM, Choiten Wangchuk clarified to the members of the DT that  there hasn’t been any damage or disturbance caused at the site. The department has also asked the experts group to halt the research works since February.

Meanwhile, some of the areas that the DGM is studying also fall under the Jigme Khesar Strict Nature Reserve park’s premises identified as habitat for the endangered Red Panda. The chief of the nature reserve park, Sonam Tobgay, said any developmental activities in the area would disturb the endangered species. For this matter, even locals are prohibited from extracting any natural resources from the area.

“Forests officials wouldn’t issue us permit to extract timber from the area stating that it is a protected area. So we extract timbers from other areas,” said Gakiling Mangmi Tenpa Rinchen.

However, the DT Chairperson, Thinley, said the locals have no issues with the department studying areas that aren’t sensitive.

“Some of the identified blocks, fall into areas that are safe for study in Shaba and Shepji under Sangbay Gewog. It is near the road and we have no issues for now. We will assess when they come for community clearance and other clearance in the future.”

According to Director-General Choiten, the department will collaborate with the forest division to assess the mineral reserve in other areas while the works at the two sensitive areas will be suspended as per the DT’s resolution.