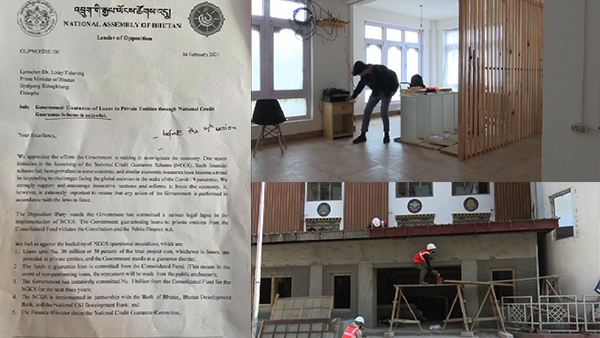 As an intervention under which the government guarantees a portion of the loans availed for establishing a viable business entity to enhance access to financing during the COVID-19 pandemic, the National Credit Guarantee Scheme (NCGS) was launched in October last year. Today more than Nu 137 M has been approved for 42 private business proposals under the scheme.

Jamgoen Yeshi Dorji, the founder of Home Maintenance Services based in Thimphu started his business in 2019. The business deals with civil works such as masonry, plumbing, welding, carpentry, paintings and other electrical works. Formed by six young men, the business since its inception is going well especially when there is an acute shortage of workers amid the COVID-19 pandemic. However, there was a need for extra financing.

“We did such small businesses before in 2019. But without much support, we couldn’t come out as proudly as now. The NCGS loan scheme has benefitted us a lot. First, we do not need collateral. And with this, it is easier for us. Because we all come from a decent family. There is no one to support us in our business,” he said.

Likewise, 41 other business proposals were also approved. According to the NCGS Facility Programme, the banks approve business proposals covering four major thrust area such as import substitution, export promotion, innovation and technology and employment during the COVID situation.

One such is Samuh Mediatech. Zangmo Drukpa, the CEO of the technology-based media startup said her idea materialised into a company all because the access to finance has been made easier by the NCGS.

“It was launched at a time when a lot of businesses were not doing well and if you look at the creative sector, besides the tourism sector, the creative sector has really been affected by the pandemic. I think for Samuh, it really did come at a really good time because as a startup, access to finance is one of the biggest challenges, especially in Bhutan. So there is only so much that you can get through banks and without collateral again, it’s not possible at all to raise the kind of finances required to set up a company like Samuh,” she said.

To date, three banks received 172 business applications. More than Nu 137 M was approved by three banks to 42 private business proposals. Of this, Nu 15 M was disbursed so far. The collateral requirement has been a major impediment, in particular, for aspiring entrepreneurs to avail financing.

“Some say the number is less. But I would like to say the number is good because it shows that we are not approving or we are not taking into consideration any project which is coming on the table. I would like to commend the due diligence of the banks. The banks are really scrutinising given the nature of the scheme. They are taking only serious proposals,” said Sonam Penjor, the Director for the NCGS Support Facility.

Earlier this year, the Opposition Party alleged that the scheme was unlawful. In its letter to the Prime Minister, it questioned the legality of the government taking up the role of the guarantor for loans given to private entities.

In response, the government said that the risks involved in the scheme are well acknowledged. For failed projects, as a last resort, the finance ministry will propose appropriation through money bills in the event of any payment required to be made for losses incurred. The government will even follow a legal process to use money from the consolidated fund when required. Talking to the Opposition Leader on this, he said that the response has in fact reconfirmed their position on its legality and the concerns about its huge implication on the consolidated fund.