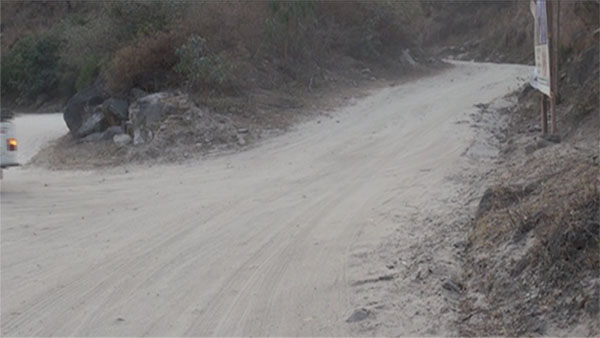 All gewog centre (GC) roads in Trashi Yangtse has been blacktopped except for the Tongmajangsa GC road. The understanding was Kholongchhu project will do the blacktopping works since heavy vehicles and machinery of the project will be using the road.

“The blacktopping work was approved in the first financial year by the government, however, the road is mostly going to be used by Kholongchhu project’s heavy vehicles. And since our blacktop thickness is not good enough and wouldn’t even last for a month with such traffic, we have left the work to the project after discussing it among the Project, Department of Roads and the Dzongkhag,” said Lam Dorji, the Trashi Yangtse Dzongrab.

However, 5 years later the blacktopping work on the 12.3-km stretch GC road is still not started. And the locals are the affected lot.

“There is a lot of problems, we know as we drive our car and we have to spend more expenditure on maintenance, and fuel. And even to visit the hospital, the actual road is just 30 minutes drive but it takes around two hours,” said Sonam Dorji, from Tongmajangsa in Trashi Yangtse.

“The problem is that we cannot travel because it’s muddy in summer and dusty in winter, where we have to spend on vehicle maintenance more frequently. Now we don’t have people working on the roadside and I am sure there will be more problems,” added Wangdi, from the same gewog.

People there say if the Project is not going to blacktop their road, then the Dzongkhag should do as it did with the other GC roads.

However, the Kholongchhu Project office said they are ready to provide money and they are waiting for the Dzongkhag and Department of Roads to submit the cost estimation of the road to their office.

The Department of Roads has carried out the survey and submitted the estimation cost to Dzongkhag and the Dzongkhag is soon going to discuss with Kholongchu Project.