Load carrying capacity for trucks to be increased 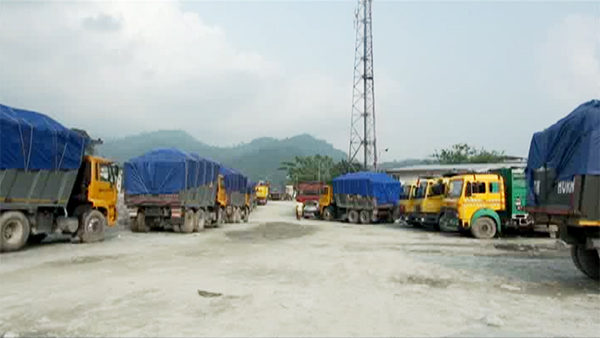 Lyonpo Karma Donnen Wangdi said, regarding the issue, two rounds of the meeting were held with the Royal Bhutan Police, RSTA officials and private exporters in Phuentsholing recently. The cabinet also met twice before deciding to increase the load carrying capacity limit for trucks.

The RSTA started enforcing the 15-metric ton load carrying capacity limit for trucks since May 20. This adversely affected many truckers as the export of boulders to Bangladesh came to a standstill.

“We would like to apologise our people for such problems that they are facing at the moment. We decide to solve this problem within two to three days. The day this problem was reported to us on 17th of this month, we have been working on this day and night for over two weeks now,” Lyonpo Karma Donnen Wangdi said.

The Information and Communications Ministry will also review the Gross Vehicle Weight (GVW) within this week as per the increase made by India’s ministry of road transport and highways. This is possible since the trucks in Bhutan are imported from India.

The members said the need to increase the load carrying limit has become urgent considering the contributions of such a business to the country’s economy. Today, there are about 12,000 trucks registered with the RSTA. The Bhutan Chamber of Commerce and Industry, on behalf of the business community, had also appealed to the economic affairs ministry to intervene immediately and revisit the load carrying capacity limit imposed on heavy vehicles. The letter highlighted several unfavourable consequences to the economy following the rule.

“They contribute to our economy by ferrying goods and services from one place to another and undertake most of the heavy transportations. Without trucks, our economy will suffer a setback in terms of getting supplies and transporting goods to an intended destination,” Dewathang_Gomdar MP Ugyen Dorji said.

The members called for an amendment of Section 68 of the RSTA Act 1999 which states, “A person must not drive or allow vehicle to be driven on a highway if the vehicle is carrying a load which is in excess of the manufacturer’s specifications for that type of vehicle or it exceeds the gross vehicle weight for the vehicle.”

On the recommendation for the Government to immediately introduce measures to increase GVW of trucks, all the 42 members present supported the motion with a show of hands.

The House also voted to amend the RSTA Act to increase the load carrying capacity of trucks with 29 Yes votes, 12 No votes and 1 abstained from voting.