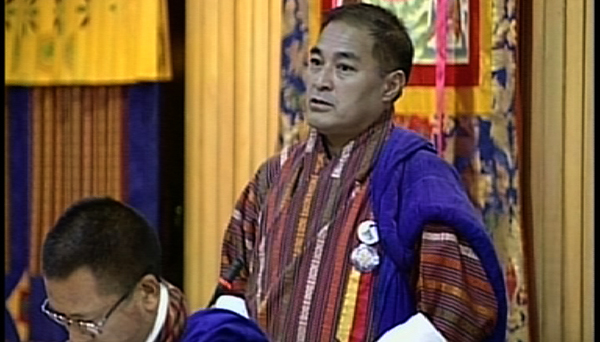 Impeachment Procedure Bill of the Kingdom of Bhutan 2019 for the Holders of the Constitutional Offices was introduced in the National Council today. The Chairperson of the Natural Resources and Environment Committee of the Council presented the Bill in the house today.

The bill which is first of its kind contains impeachment procedures for the parliament to remove constitutional post holders.

“The need for such a bill was discussed since the second parliament. Section one and two under article 32 states that Parliament may upon making a law prescribing impeachment procedures, remove any constitutional post holders on the grounds of incapacity, incompetence or serious misconduct. Hence, the house felt the need to draft the bill,” MP Tashi Samdrup, the Chairperson of the committee, said.

The committee came up with the bill upon meeting with the representatives from the constitutional institutions. However, two constitutional offices did not turn up for the meeting.

“Upon our invitation, four institutions turned up for the consultative meeting. However, two institutions namely the Supreme Court and High Court didn’t turn up for the meeting. Their presence and their wisdom in the legislative field would have had enormous benefit while making the bill. But we have had the four other institutions and included their opinions while drafting this bill,” the chairperson added.

According to the bill’s impeachment procedures, a Member of Parliament (MP) may submit, to either Chairperson of the National Council or Speaker of the National Assembly, a motion for the impeachment of any constitutional post holders. They may do so on the grounds of incapacity, incompetency or serious misconduct by the constitutional post holders. It also mentions that the member may do so provided the motion is supported in writing by at least one-third of the total members of either house. The Chairperson or the Speaker will then approve or reject the member’s motion upon examining.

The bill also requires that the motion be presented, discussed passed by both the houses upon which an Impeachment Investigations Committee shall be formed. The joint committee will then conduct a thorough, clear and partial investigation into allegations against the constitutional post holders.

Among many, members submitted their concerns on the flexibility on the section, options for voluntary resignation and ambiguous on the definition.

The house directed, the Committee to incorporate suggestions made by other members for final deliberation of the bill. The House will continue deliberations on the bill tomorrow.