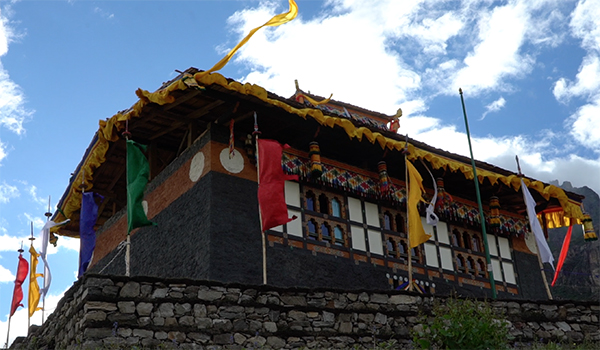 His Majesty The King graced the consecration of a Palden Lhamoi Lhakhang in Tenchoe village during the recent Royal Visit to Lunana.

The consecration of the newly restored lhakhang, held on the 6th of July, was presided over by the Dorji Lopen of the Zhung Dratshang.

The restoration of the Lhakang was carried out upon the command of His Majesty during the Royal Visit to Lunana in 2016.

The lhakhang houses a goenkhang of Palden Lhamo, the protective deity of Bhutan.

Located at an altitude of over 4,100 meters, locals believe, blessings from the lhakhang will benefit and spread far and beyond the country.

“We have Rabstang, Thothromi, and Lugi lake above our village. This new lhakhang will serve as an offering to those lakes,” Lunana Gup Kaka said.

“I feel the lhakhang will benefit not just Bhutan but the entire world.”

His Majesty granted tokha to over 400 lunaps gathered for the lhakhang consecration.

“This is the third time His Majesty walked all the way to Lunana gewog, sacrificing his wellbeing. We have nothing but gratitude for His Majesty,” Gem Tshering from Lhedi said.

“I am so thankful to His Majesty,” Pema Khando from Tenchoe said.

“He is our Buddha. Before, we didn’t even have a matchstick to light our homes, but now we have solar light and water. I pray for the long life and wellbeing of His Majesty The King.”

“In a remote gewog like ours, and at a time when the monsoon rains are at its peak, His Majesty braved the rain and muddy paths, and climbed to the highest mountains, sacrificing his wellbeing, to come and meet us. I am very thankful. We, the Lunaps, are very thankful,” Gup Kaka said.

While in Lunana, His Majesty offered prayers and butter lamps at the Tsho Zhob Dzong in Tshojong village and met with its people.

His Majesty also met with the people in other villages of Thangza, Dotag, Lhedi, Wachey, and Ramina.

On his way to Lunana, His Majesty met with the people of Sephu in Wangdue and cordycep collectors.