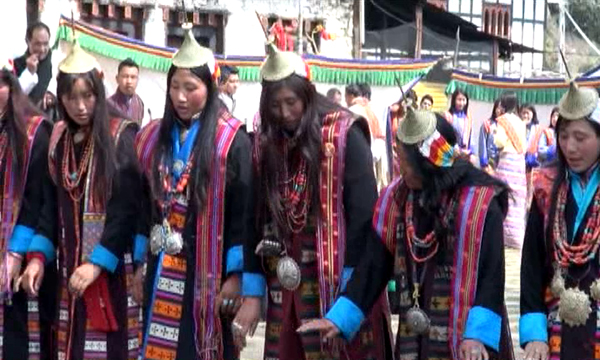 Laya’s traditional bamboo hat, once widely worn by its women, is fast disappearing. There aren’t many weavers left around now and the women too seldom wear the hats.

The hat is an integral part of the highlander’s culture. In the past, Layap women wore it every day. But now it is worn only during special occasions like Tshechu.

Today, there are only three weavers of the hat left in Laya. The younger generations are showing no interest in learning the art, putting the tradition at the risk of disappearance.

Chimi Dem and her husband are Laya’s two of the last three remaining weavers of the hat.

Chimi is afraid it wouldn’t be long before the traditional hats are replaced by imported ones. “If at all the hat is not woven here, I am sure replicas of the hat made from plastic in India will make its way into Laya,” she said.

Chimi learned the art from her late father. She has woven hundreds of hats over the last 15 years. It takes her an entire day to finish one hat, which fetches her 600 ngultrum.

She is upset that nothing is being done to preserve the traditional hat. “It would be good if the young show interest in learning the art as it would help keep our hat tradition alive,” she said.

She says she is happy to teach but as of now, no one has come forward to learn.

Many women in Laya now prefer kira over their traditional dress. This, Chimi Dem said, is one reason why the hat is becoming a rarity.

“We have to put on the hat if we wear zum, which is our traditional attire. This is our tradition. We don’t wear the hat when we wear kira, but young women these days prefer kira. The hat tradition might disappear soon.”

Like remote,  traditional cultures elsewhere in the country, this is, perhaps, Laya paying the price for opening up to the outside world and the so called modernization.