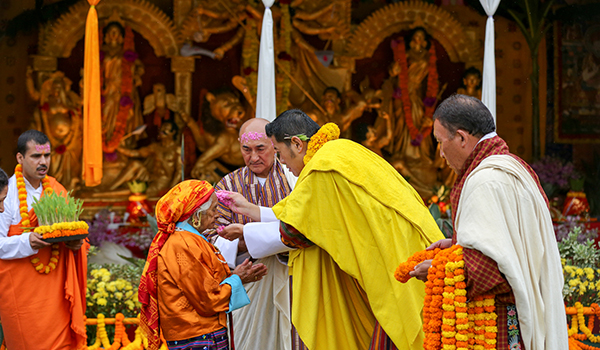 His Majesty The King granted Dassain Tikka and blessings to representatives of the Hindu community gathered at the Lingkana Palace.

A representative each from the sixty gewogs of the southern Dzongkhags of Samtse, Sarpang, Dagana, Samdrup Jongkhar, Chhukha, and Tsirang were joined by other representatives of the Hindu community including the Hindu Dharma Samudaya.

The Durga Puja was held yesterday at Lingkana Palace, conducted by priests from the Hindu Dharma Samudaya. Dassain is one of the most important festivals of the Hindu community in Bhutan. The festival, which lasts for 15 days, starts from the new moon till the full moon in the Hindu month of Ashvin/Asauj. 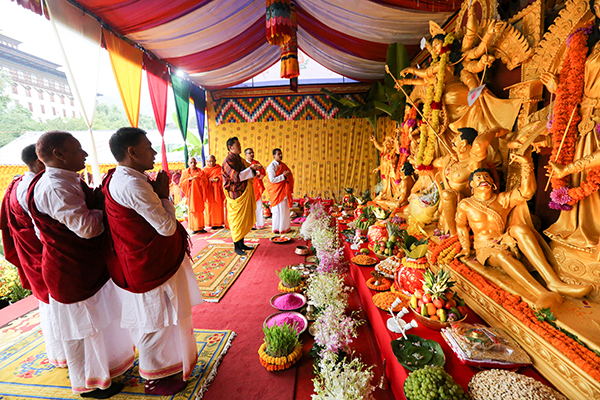 According to Hindu scriptures, Dassain is celebrated to mark Rama’s victory over the demon king Ravana. Goddess Durga is said to have played a pivotal role in these victories, for which she is particularly worshiped during the Dassain festival.

The Tikka is an offering made to goddess Durga for peace, prosperity and happiness. The Tikka is a paste made of mixture of rice grains, curd, and red vermillion powder. It is applied on the forehead as a mark of blessing from the goddess Durga.

Elders and parents place Dassain tika on the foreheads of their children and younger members, to impart blessings and protection to their family.

The Tikka used in the ceremony today was sanctified from the Durga Puja. After being blessed by His Majesty, part of the Tikka was distributed through the Hindu mandir, and used in Tikka ceremonies across the homes of Hindu families.

Prime Minister Dasho Tshering Tobgay, and other senior officials of the government also took part in this special celebration.

Dassain was declared a national holiday in 1980.