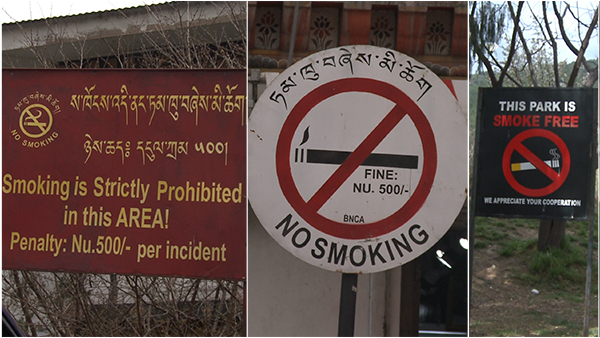 Despite stern rules in place, people continue to smoke in public places such as drayangs and bars. From start of this year until March, Bhutan Narcotics Control Authority (BNCA) fined 58 people including owners of entertainment clubs for not abiding the rule.

As per the Tobacco Control (Amendment) Act of Bhutan 2014, any person found smoking in public places is liable to pay a fine of Nu 500 per incident. If caught smoking without paying the tobacco import tax, the person will be fined Nu 10,000.

BNCA officials spelled out that the legislation has outlined penalty provisions precisely.

“Even the person in charges, person in charges is actually entrusted with the responsibility of ensuring that all the public places are kept smoke free but any person in charge of any shop or bars fails in their duty, then the owner or the manager will be liable of Nu 1,000 per smoker found in their premise,” said BNCA’s Legal Officer, Tshering Om.

They added although entities and organizations have smoke-free zones or areas designated for smoking, not many follow it.

However, some people said the existing tobacco control law is stringent enough but needs to be executed effectively.

“When we go to entertainment centers, there are people who smoke even when there is a no smoking sign. Being a non-smoker, I feel their habit affects the health of those sitting nearby as well. Even the owners do not say anything,” said a person who sought anonymity.

BNCA officials will soon team up with Bhutan Agriculture and Food Regulatory Authority (BAFRA) and other relevant agencies to carry out inspection in the capital.

“We are planning to carry out inspections in Olakha and Mothithang areas together with Customs, BAFRA, Trade officials, and Police. Our inspections are based on the complaints we receive,” said the Assistant Programme Officer of BNCA, B.B.Poudyel.

Bhutan Narcotic Control Agency will conduct similar inspections in other parts of the country. To further consolidate its monitoring, the office also plans to recruit three more inspectors by the end of this month.