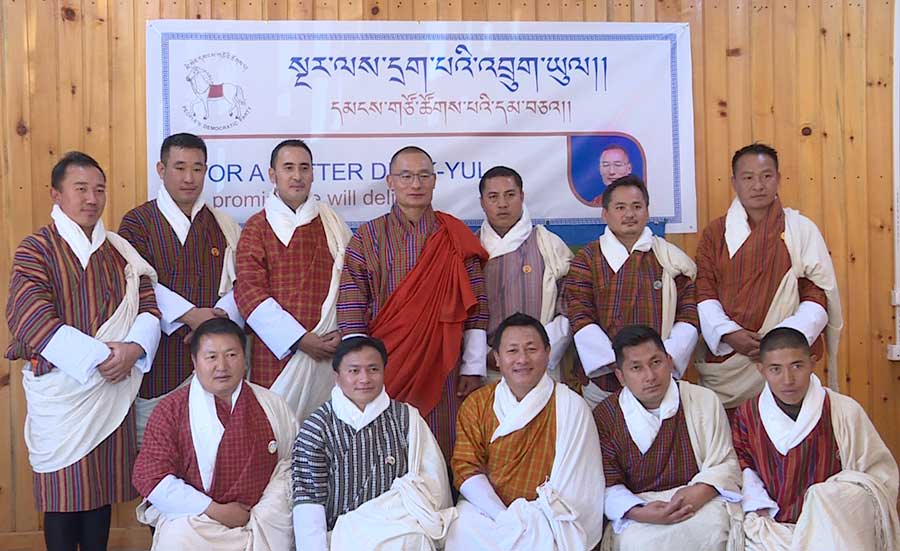 People’s Democratic Party (PDP) today, declared 11 candidates for the upcoming Parliamentary election. Of the 11, 10 are new candidates. They will replace the former candidates from their constituencies who contested in the 2018 election.

Thirty-seven-year-old Namgyal Dorji will contest from the Kabji-Talo constituency in Punakha. He has a Masters’s Degree in International Relations & Diplomacy from the Australian National University.

Namgyal Dorji has worked with the Foreign Ministry for 12 years. He has also served as the First Secretary at the Permanent Mission of Bhutan to the United Nations in New York. And he was serving in the Multilateral Department before joining PDP.

44-year-old Namgay Wangchuk is contesting from the Lingmu-Toewang constituency in Punakha. He is a former Member of Parliament. Namgay Wangchuk completed Masters of Public Policy and Management from Murdoch University, Perth in 2017. Namgay Wangchuk re-contested for election in 2018. He has served as the President of the Association of Bhutanese in Perth.

Sonam Tashi will represent the party from the Lamgong-Wangchang constituency in Paro. The 33-year-old has a degree in electrical engineering from the College of Science and Technology. Sonam Tashi contested as a National Council candidate from Paro in the 2018 election.

35-year-old Lhendup Wangdi from Haa is contesting from the Bji-Katso-Uesu constituency in Haa. He has a Bachelor’s Degree in Business Administration from the Gedu College of Business Studies. He has also served as an Assistant Lecturer in the same college. Before joining politics, he was running a business in Haa.

Kelzang Phuntsho, a father of two is contesting from the Dewathang-Gomdar constituency in Samdrup Jongkhar. The 40-year-old has a Master’s in Business Administration and has worked in the private sector for 16 years. He is currently serving as the Chief Operations Officer of Link Unify, an information technology company. He also worked as a Human Resource Officer, Administrative Officer, and Data Centre Manager in private ICT companies in Bhutan.

Ugyen Lama is PDP’s candidate for the Dophuchen-Tading constituency in Samtse. He has a Bachelor of Science in civil engineering from the College of Science and Technology. The 33-year-old worked as a project engineer until 2018 when he resigned and contested in a National Council election.

Pempa is contesting from the Bongo-Chapcha constituency in Chhukha. He has served in the Royal Bhutan Army for 10 years. The 40-year-old has a Bachelor’s degree from a university in India and also a Diploma in office management. A father of two has contested in National Council Election in 2018 and later in the National Assembly election.

Lhaba Lhaba will represent the People’s Democratic Party from the Khatoed-Laya constituency in Gasa. He holds a Bachelor’s degree in Commerce from Gedu College of Business Studies.

The 29-year-old has worked in Kuwait through the labour ministry’s overseas employment programme. He has also worked as a procurement officer with the Jigme Singye Wangchuck School of Law in Paro. Before joining PDP, he was running a restaurant in Thimphu.

Pema Wangchuk is contesting as a PDP candidate from the Nanong-Shumar constituency in Pema Gatshel. The 43-year-old has a Master of Legal Studies from the University of Canberra and a Postgraduate Certificate in Management from another University in Australia. He has worked in both the government and private sectors for 20 years.

He currently works as the CEO of a private company in Pema Gatshel.

48-year-old Yeshey Nidup will represent the PDP from the Khaling-Wamrong constituency in Trashigang. He has completed a Master’s in Geological Engineering from the University of British Columbia, Vancouver in Canada, a Master of Project Management and a Master of Business Administration from Edith Cowan University in Australia.

Yeshey Nidup has worked as an Assistant Engineer with the Department of Roads and resigned as the chief engineer of Phuentshogling Thromde.

The party’s former Member of Parliament, Tshering will contest from the North Thimphu constituency. He has a Bachelor of Science in visual communications from Madras University in Chennai. The 39-year-old has worked in media, construction, real estate and legislation. Tshering won the North Thimphu constituency bye-election by a landslide in 2016.