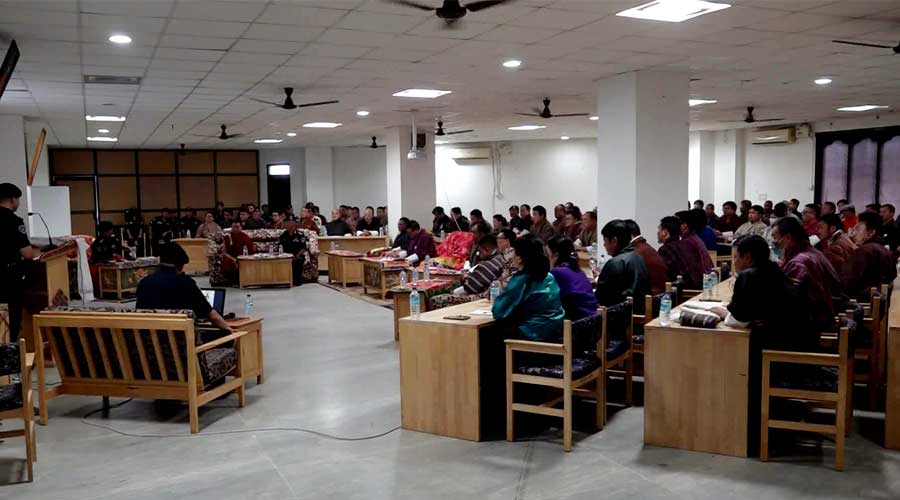 To tackle rising incidences of youth in conflict, parents and other community members in Sarpang suggested Royal Bhutan Police discontinue publishing pictures and names of illicit drugs they seize on its social media page and other news outlets. Doing so, they said only exposes children to illicit drugs which could lead to drug use. Officials from the Crime and Operations Division of the Royal Bhutan Police were in the district yesterday to sensitise communities and relevant stakeholders to bring down rising incidences of youth in conflict.

During the sensitisation programme, one of the participants raised concerns about the RBP’s initiative of publishing pictures and names of illicit drugs on their social media page. According to parents and stakeholders, the initiative is unnecessarily exposing children to drugs.

“I feel that it’s best if we don’t publish the picture and name of the drugs. My son is small. Once I was explaining to him how police will arrest him if he indulges in substance abuse and start taking drugs. My son then questioned me if the tablets shown on TV are drugs. So, that’s when I realised that this initiative unnecessarily exposes children to drugs by seeing the picture on TV or social media,” said, Gyamtsho, a resident of Sarpang.

“Some parents don’t listen to our advice and they send their children by giving money to celebrate birthdays. We have reminded parents that their children can celebrate but the parents should accompany them which didn’t work out. And that’s why we have had 34 cases of fights taking place during birthday celebrations,” said Zhembay Dawa, Principal of Gelephu HSS.

Once the team covers the rest of the district, the Crime and Operations Division will compile the feedback and suggestions.

The team said there’s a need for a collaborative multi-sectorial approach to tackle the rising incidences of youth crime.

“Despite initiating various advocacy programs and doing our duty, the problem is still on the rise. Where are we going wrong? It’s time we look into new alternatives, plans and strategies. Otherwise, our youth will continue indulging in unwanted activities,” said Col. Passang Dorji, Deputy Chief of the Crime and Operations Division of the Royal Bhutan Police.

To understand and address the risk and protective measures, officials from the Crime and Operation Division started the sensitisation program last month. They have covered twelve districts so far.

The country reported more than 1,700 cases of youth-related crimes as of July this year.