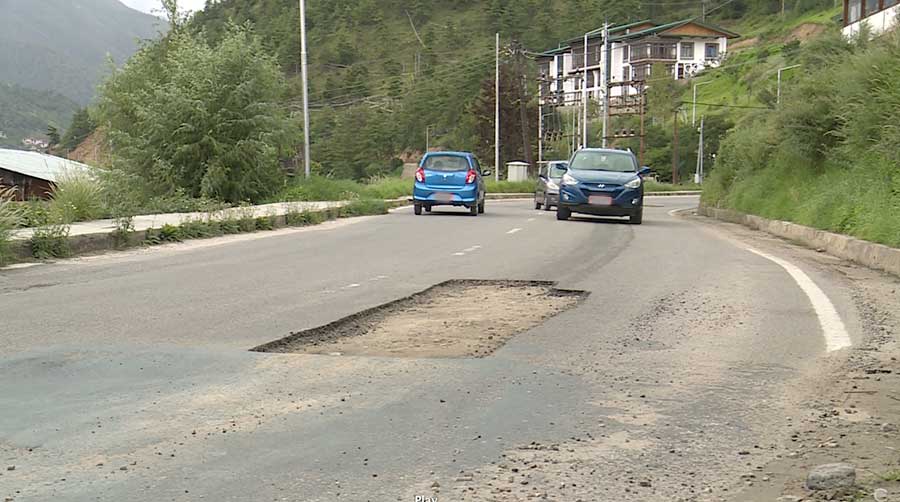 The Thimphu Thromde is carrying out major maintenance across the city. As part of the initiative, several roads have been dug for major pothole maintenance. But without the holes being covered for nearly a week, it is turning the Thromde’s initiative into commuters’ nightmare.

With newly dug potholes every few meters away, a driver either has to dodge the potholes or end up driving through them. Moreover, there are no safety signboards cautioning motorists about the potholes.

However, through its official Facebook page yesterday, Thimphu Thromde shared that the office is waiting for the bitumen to arrive and requested the public to be careful while driving on the roads.

And while the thromde waits to fill these holes, the motorists are bearing the brunt.

“We drive every day. It is inconvenient, especially when it rains and have to carry passengers. And now that road has been dug every few meters away, we end up driving through the potholes. I don’t know when are they going to fill the holes. I think they should fill the potholes instantly,” said Cheki Dorji, a motorist.

“I drive a taxi and we have to travel every day. Sometimes we also need to drive during night hours and that’s when we miss where the potholes are. It is very inconvenient. Sometimes we do not even get control over our car on such roads with high chances of getting into an accident. We would be thankful if it is covered soon,” said Sangay Lhamo, another motorist.

Drawing a lot of criticism on Thromde’s Facebook post, a lot of people poured frustrations over thromde’s lack of organised planning.

Meanwhile, the Thimphu Thromde said that their initial plan was to restore the potholes the same day the road was dug and the office did that until Friday last week. But the Construction Development Corporation Limited’s plant broke down. Thromde procures bitumen from CDCL.

However, the Thromde office added they have found an alternative source and the bitumen will arrive tomorrow and the thromde will continue restoring the roads.