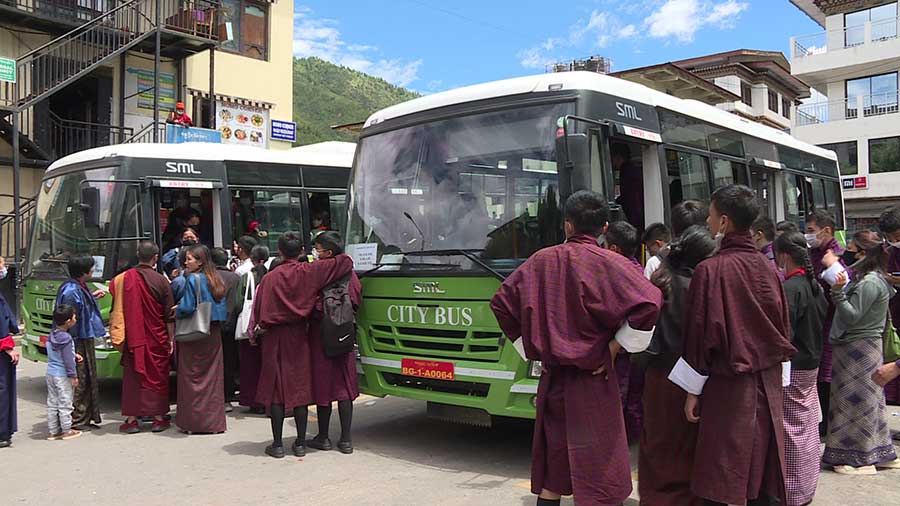 More people in the capital are using the city bus services amid the growing number of vehicles and traffic congestion. The fluctuation in fuel prices with more hikes than drops, and the availability of city buses throughout the day have encouraged more people to use the city bus services. According to the City Bus Service, the number of city bus users has increased by two folds.

There are more than 60 buses in the capital today including 27 recently acquired buses. Due to this, the new route system has been introduced whereby the service is available from 7 am to 10:30 pm through various routes. Also, the introduction of smartcards has attracted more people to use the service.

Today, there are more than 7,000 people using the smartcard.

“We started the new route system and also started the smartcard system and Gakyid ride app so we are trying our best to make it user-friendly. Now we can see that the number of users has increased a lot,” said Passang Tshering, the Manager of Operation and Maintenance at the City Bus Service.

According to him, the number of daily city bus users has increased to about 16,000 from about 8,000 in the past.

The regular service is welcomed by people like 12-year-old Tshering Youden.

Studying at Jigme Losel Primary school, she is amongst many passengers who use the city bus service on a regular basis.

“Taxi fares are expensive so I feel the city bus is very helpful. My parents have also got me a smartcard so it’s very convenient for me.”

It is a common sight to see people waiting in groups at designated bus stops in the capital. And it is also common to see passengers hopping in to grab a seat before it is taken. The buses are crowded with people, especially in the morning and evening hours.

“There’s a vast difference between taxi and city bus. City busses are helpful in every aspect for us. City bus fare is about 4 to 5 times cheaper than taxi fare. So, it’s helpful to low-wage income earners like us,” said Rinchen Wangmo, a cleaner in Thimphu.

“With the government providing city buses and with an increase in fuel prices, I always travel by city bus,” added Tenzin Norbu.

Meanwhile, the City Bus Service is currently focusing on giving priority lanes for the buses during peak hours, which start from 7 am to 10 am, and then 3:30 to 6:30 pm.

“During these hours, there will be a lane dedicated only to the buses, ambulance and fire engines, which will help the buses to reach the destination on time. This would increase the reliability factor, which means we will be encouraging more riders,” the Manager of Operation and Maintenance of the City Bus Service added.

He also said it is economically advisable to make use of the city bus services given the high price of fuel and spares of vehicles. “If 50 people use one bus, we will be cutting off like 49 small cars on the road.”

The positivity surrounding city bus services does not end here. The country expects to have its first electric city bus in six months’ time. This is expected to retain young riders like Tshering Youden to keep using the services besides attracting more users, and contributing to a clean Bhutan vision.