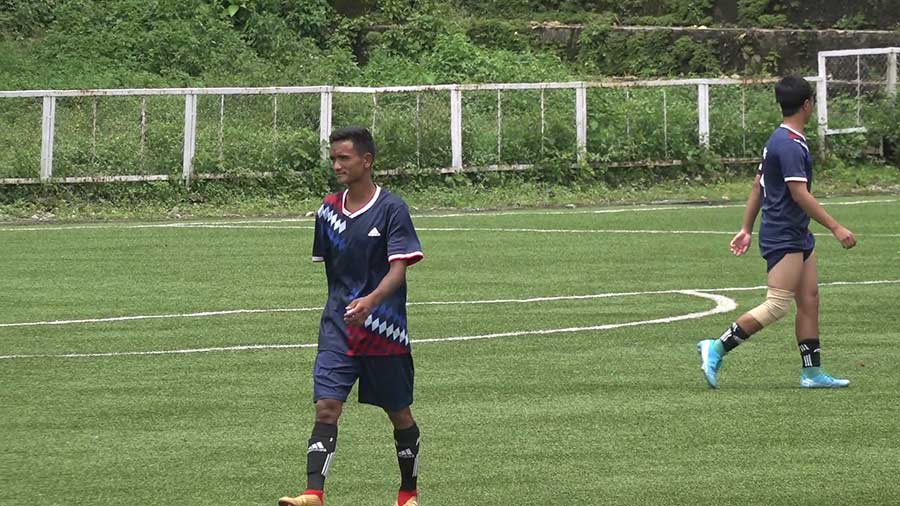 Everyone is special in their way, and so is 22-year-old Amir Rai, a class twelve student of Tendruk Central School in Samtse. Despite not having an arm, Amir is kicking all odds and finding success on the football field today.

Disability is not a barrier for Amir Rai. He has not allowed his condition to keep him off the field. Amir is representing his school today and playing in the Bhutan Higher Secondary School Championship finals for Samtse district.

From the start of the whistle, Amir waste no time torturing his opponent by constantly keeping them on their toes.

A quick link-up with the midfielders and he helps his team find the back of the net. They go on to win the game four goals to one becoming the champions of Samtse district.

The only child in the family, Amir lost his right hand in an accident in 2006 while he was at his village in Dzongsar, Tendruk.

“When I was a child, I climbed an electric pole and when I was about to fall, in search of support, I caught the electric wire by mistake. I was bedridden for three days and when I opened my eyes I was at the Thimphu hospital,” recollects Amir.

But this has not stopped him from playing the game that he loves. He has been a regular school team member from his primary school days.

“The first time I played football was when I was in class I. We couldn’t win the competition but were crowned the runners-up. Since then, I have been playing football wholeheartedly.”

Be it his coach or his teammates, everyone is full of praise for Amir who has not only excelled as a player but has also motivated and inspired many.

“I know Amir since he was in class seven. He has been a good player from a very young age and today too he is doing well. To be honest, many consider Amir as a role model for football in our school,” said Jewan Rai, the Coach of Tendruk Central School.

“If he is not available for our next game, I think we will lose our next game. This is because the main thing that a team needs is good cooperation and this can only be given by him. I consider him as one of the best players on our team,” said Pelden Tamang, a student at the school.

“We consider him as our role model. Not only does he motivate us but he also inspires us with his presence. We learn a lot from him,” added Santosh Rai, another student.

Despite the odds, Amir has a plan for his future.

“Since a very young age I have had this dream that once I complete my higher secondary school, I want to play for a professional football club. And if possible, I wouldn’t mind representing and playing for our nation and helping take our country’s name to the top.”

But for now, being the champions of Samtse, Amir and his teammates are focused only on one dream: to take part in the national level of the Bhutan Higher Secondary School Championship which will be held later this year.