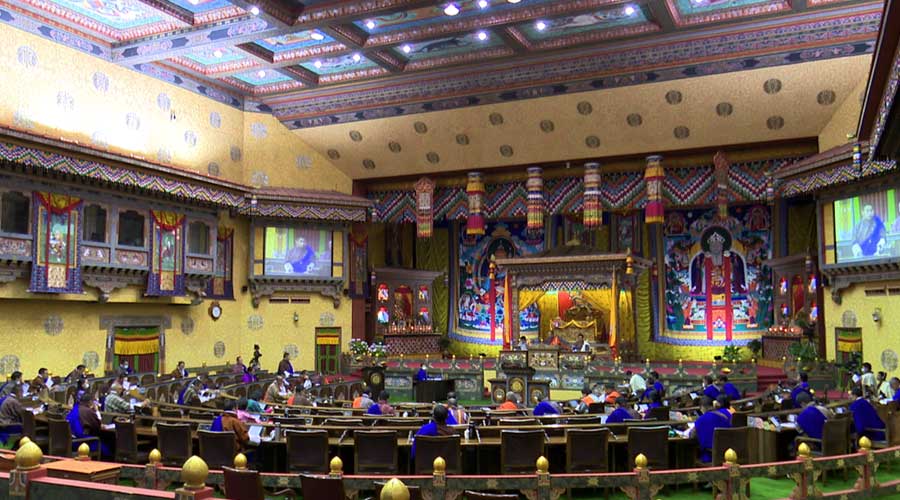 Discussions on the Tourism Levy Bill in the National Assembly today focused on one main issue – should the Bill be delayed by six months? The Tourism Levy Bill 2022 which was introduced as a Money Bill by the finance minister on Monday proposes to raise the sustainable development fee to 200 USD per person per night.

Opening the discussions, the Chairperson of the Economic and Finance Committee, Kinga Penjor, said the Bill is, by and large supported, by the stakeholders. They support the purpose which is to promote Bhutan as a destination for exclusive tourism and ensure that it benefits the Bhutanese public. They also support the SDF of 200 USD but they want the revision to be postponed by one to two years so that they can prepare accordingly.

“The committee found that postponing the implementation by one or two years will be too late. As per the committee members, six months will be enough for the tour operators to prepare. Therefore, we decided to extend the commencement date by six months.”

He said close to 30,000 tourists are due to arrive in the country by June next year. The tourism industry would lose the carefully cultivated goodwill if their scheduled visits are cancelled. He also said implementing the revision immediately would affect the tour guides and also the two airlines.

“There are tour operators and then there are airlines. The airlines have taken loans to start businesses. It will be a huge loss for them if the business drops. So, we also had to discuss all these aspects.”

Opposition Leader Dorji Wangdi also asked the House to consider delaying the revision so that people working in the industry could prepare for it.

“While discussing with the tour operators, we came to know how long it takes for them to confirm arrivals with the tourists. It cannot be done overnight. It takes time. Considering all these, it would give them the time to prepare even if it can be extended by six months.”

In response, the Prime Minister clarified that the revision will not affect tourists who are scheduled to arrive in the country, or those who have already made their bookings. He asked wheteher the guides will be fully employed if the revision is delayed by six months, and would the airlines get passengers.

“We also think that the number of arrivals will drop as we implement the Bill. But the same will be the case all over the world. It is going to take some time for the tourist arrivals to pick up. They have been running in a loss and will run into a loss for some time. There is no study indicating that the arrivals will pick up drastically in 2023. And six months’ time extension will not address these issues anyway,” said Prime Minister Dr Lotay Tshering.

Making an impassioned plea to the House, Lyonchhen said assuming that the Bill is delayed by six months, the stakeholders would likely ask for further delay when it is once again discussed in the House.

“While drafting the Tourism Levy Act 2020, the hoteliers wanted us to do away with the Minimum Daily Package Rate of 250 USD. They wanted the Act to allow them to receive the tourists directly without having to route it through the tour operator. This Bill has it all included this time. And if they think the Bill is untimely today despite including all they suggested, they will never find it timely.”

Foreign Minister Dr Tandi Dorji, who is also the Chairperson of the Tourism Council, said the tourism industry has been severally affected by the pandemic. He said globally, the industry would bounce back only by 2025 according to experts and delaying the revision by six months or a year wouldn’t make any difference.

“The government has prepared everything and I do not see the need to postpone the implementation of the Bill. Moreover, experts have predicted that there won’t be any tourist arrival for over a year.”

The issue of whether the revision should be postponed was resolved by a show of hands, the majority decided that it isn’t necessary to postpone it. There were all 13 members from 45 in attendance supporting the committee’s recommendation.

Tourists currently pay 250 USD per person per day. Of that 65 USD is deducted as SDF. Once the Bill comes into effect, they would have to pay 200 USD as SDF apart from expenses for accommodation, transport and other services.

Since the Bill was introduced as a Money Bill, it will come into effect on the day it was tabled for discussion, that’s June 20th, 2022.