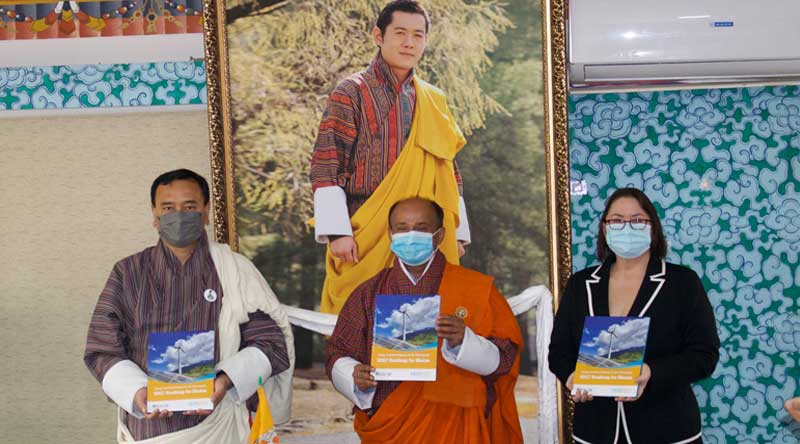 In a bid to achieve the global target of affordable and clean energy by 2030, Bhutan unveiled its Sustainable Development Goal (SDG) 7 roadmap in the capital on Monday. The roadmap provides insights into how the country will focus on the energy transition by investing more in clean and renewable energy.

SDG 7 is one of the 17 SDGs, endorsed by the UN General Assembly in 2015. It aims to ensure universal access to affordable, reliable and modern energy services.

To realise this goal, Bhutan will veer its focus towards making the cooking and transport sectors into more sustainable energy sectors.

According to the SDG 7 roadmap, more than one-quarter of the country’s population depend on firewood and LPG gas for cooking chores.

So, it suggests substituting firewood for electric stoves and energy-efficient Bhukharis.

The roadmap also recommends phasing out of fossil fuel cars and increasing the electric vehicle uptake in the country.

“Electric cars will play a vital role in reshaping the transport sector. We are seeing quite a good number of electric vehicles on the roads; especially taxis have turned into electric mobility. We are hoping public transport buses and private cars would follow suit,” said Phuntsho Namgyal, the Director of the Department of Renewable Energy under the economic affairs ministry.

He further commented that Bhutan is doing well in terms of achieving clean energy as it achieved 100 per cent electricity coverage in 2018. The country’s endeavour of achieving affordable, clean and renewable energy will help fulfil the national commitment to maintaining the carbon-neutral status.

Carbon neutrality is a state of net-zero carbon dioxide emissions.

“The SDG 7 roadmap for Bhutan has happened at the right time and it will guide us to work towards achieving SDG 7 targets by 2030. However, targets must be achieved,” underlined the Economic Affairs Minister, Loknath Sharma.

The minister added, “UN ESCAP must help Bhutan as it is more doable than any other country.”

To convert the SDG 7 roadmap into a reality, the Department of Renewable Energy is in a thorough discussion with international partners such as the Economic and Social Commission for Asia and the Pacific (ESCAP) and the UNDP.

Since energy is a dominant contributor to the effects of climate change, materialising the roadmap would also help accelerate growth in the agriculture sector.

The ESCAP is one of the five regional commissions under the jurisdiction of the United Nations Economic and Social Council. It was established in 1947 to increase economic activity in Asia and the Pacific region.

Its other key objective is to foster economic relations between the Asia-Pacific region and other parts of the world.

Headquartered in Thailand, the ESCAP has 53 member states.

The 17 SDGs or the global goals are the blueprint to achieve a better and more sustainable future for all. They were endorsed as part of the 2030 agenda for sustainable development during the UN General Assembly in September 2015.