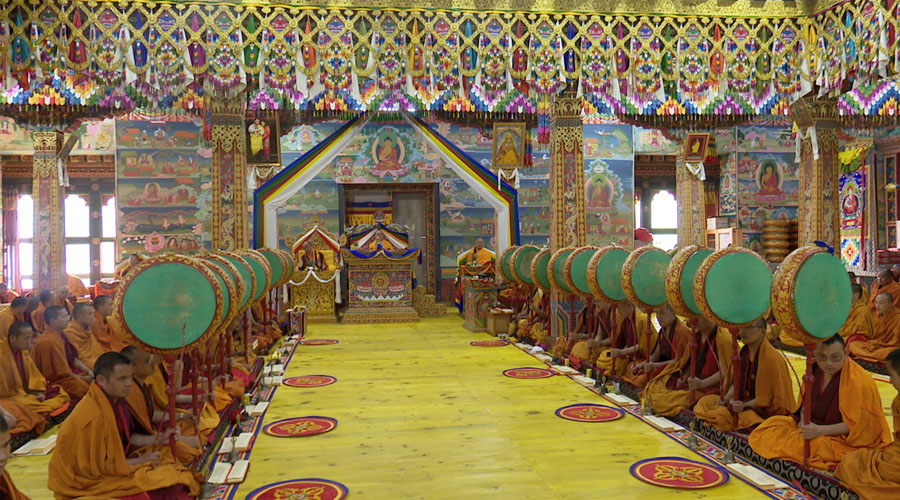 The week-long Zhabdrung Daknangmai Drupchen, held at Dorden Tashithang Buddhist University in North Thimphu ended yesterday. The sacred ritual was held to commemorate the 400 years of the Central Monastic Body, and to pay tribute and homage to its founder, Zhabdrung Ngawang Namgyel.

The Drupchen was presided over by Gyalse Trulku Jigme Tenzin Wangpo. The Laytsho Lopen and Tshugla Lopen of the Zhung Dratshang also performed the religious programme with about 350 monks.

Considered one of the most elaborate spiritual events, the Drupchen’s prayer lines were scripted by His Holiness the 69th Je Khenpo late Geshey Gendun Rinchen.

“The reason for organising this Drupchen is to commemorate the 400 years of the Zhung Dratshang and to honour its founder, Zhabdrung Ngawang Namgyel. These commemoration events were held in three parts. The first was the preparatory event, which was held by organising a debate on the national TV, then the main event was held at Punakha Dzong and the third event was this Drupchen,” said Kuenzang Thinley, the Principal at Dorden Tashithang Buddhist University.

On the final day of the Drupchen yesterday, Gyalse Trulku administered Nidup Lhawang or blessings to the devotees.

To mark the end of the Drupchen, the butter lamp offerings and the ritual cakes and snacks were immersed in the river.

According to a lecturer of Dorden Tashithang Buddhist University, Khenpo Thoepa Jamtsho, “this is to appease the local deities. In return for appeasing them, they will bring bountiful harvest, wealth and prosperity to the people and the country.”

The Dorden Tashithang Buddhist University was opened in 2015 and now has some 200 monks.