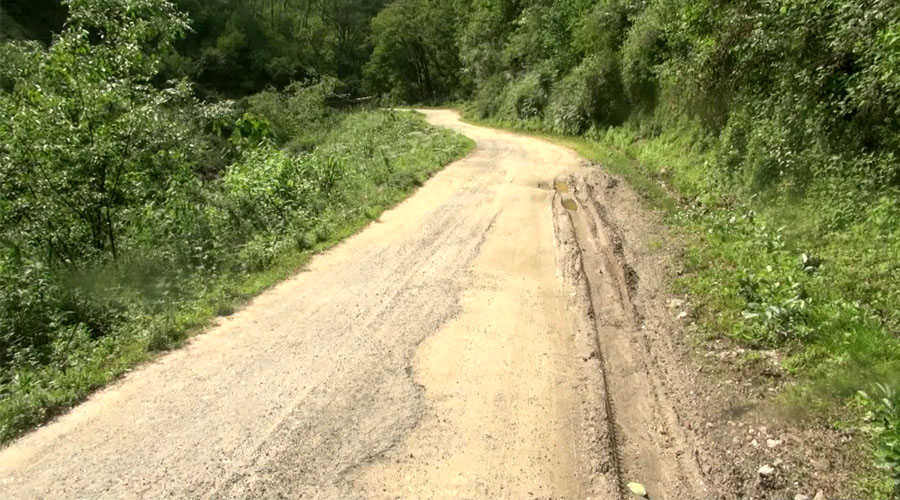 Poor road infrastructure can impede a smooth transportation system, mobility and socio-economic development. Such a similar impact is seen in Nubi Gewog of Trongsa, where the Gewog Centre Road is in a pitiable condition. It is the most frequented road by the people there as it leads to the gewog office.

The 17.5-kilometre GC road, which starts from the Bjeezam checkpoint and ends at the gewog office in Bemji Village, is in a complete worn-out condition. Its blacktopped surface has also disappeared. Apart from that, the road is riddled with potholes.

Residents recall that the road deteriorated after a week of heavy downpour in 2020, which was triggered by cyclone Amphan in India.

The bad road has brought about a frequent breakdown of vehicles and increased maintenance costs.

“It is not much of a problem for heavy vehicles. But small vehicles require maintenance after every movement along this road,” says Namgay Dhendup, a resident in Bemji Village, Nubi Gewog. “Repairing cars at a time costs a minimum of Nu 5,000 as we need to replace lubricants and other parts,” he added.

Others also share that it is an everyday ordeal to travel on a bad and narrow road.

“Transporting heavy loads via this road breaks the spring coil that holds the wheels of vehicles. And this is a major problem for us. So, if the road could be blacktopped, the people visiting the gewog office will be immensely benefited,” pointed out another resident from Bemji Village, Sangay Dorji.

Some others say it is so hard to get a taxi ride.

“Even if we wish to hire taxis, the cab owners are reluctant. They say the fuel price has increased while they get fewer fares driving on the road like this,” said Wangchuk Gyeltshen from Drengzhing Village.

The gewog has mobilised some funds for the minor maintenance of the road in the next financial year. The rehabilitation works will include filling up the potholes and alignment of sharp turns.

However, the gewog has no budget to blacktop the road to enhance its sustainability. So, it is currently in talks with the district administration.

“If we get some funds from the 13th five-year plan, we will maintain the road so that it will last for more than decades,” said Nubi Gup Pema Lhamo.

The GC road was blacktopped five years ago. Therefore, the gewog officials blame the untimely worsening of the road due to the thin asphalt overlay.

“The thickness of the blacktopped surface was not in line with the standard size, owing to the budget constraints. That is why the road became bad,” the Nubi Mangmi, Thinley Gyamtsho said.

The gewog officials also cited the daily movement of some heavy vehicles loaded with construction materials for damaging the road. Until then, the gewog’s 400 households will have to make do with the existing road condition.