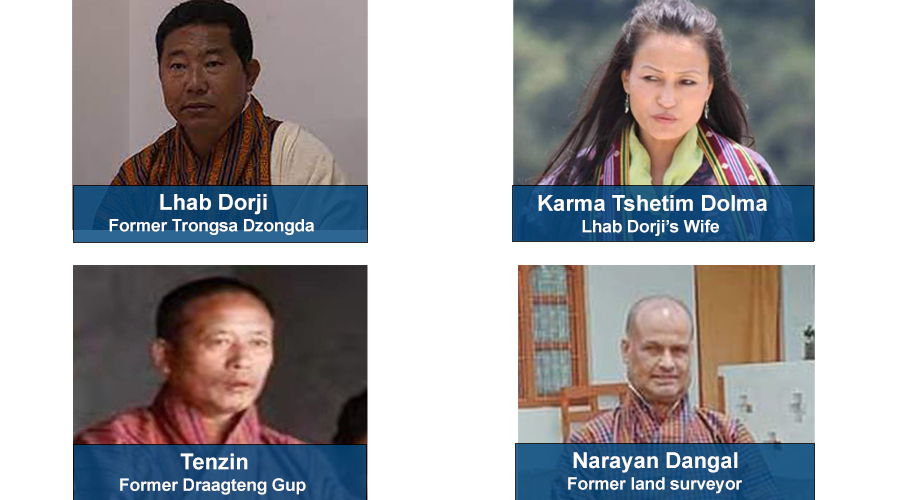 The former Trongsa Dzongda, Lhab Dorji, stabbed an official of the ACC’s investigation department with a knife at the Supreme Court, today. Lhab Dorji stabbed the official’s hand following an altercation outside the courtroom. The Supreme Court passed the judgment on the Trongsa Land Scam sentencing Lhab Dorji and three others to a prison term of 18 months to six years, today.

It was a total chaos at the Supreme Court today. Lhab Dorji and some of his family members attacked the ACC’s officials outside the courtroom after the judgment. An official from the ACC had to visit the hospital after the former Dzongda, Lhab Dorji, stabbed his hand. An official said the victim’s injured hand required four stitches. He is in stable condition. It was not clear how Lhab Dorji got hold of the knife.

Police later arrested all involved in the brawl. An official from the ACC says they will press charges against the people involved in attacking the officials.

The Supreme Court earlier today, upheld the High Court’s judgment and sentenced Lhab Dorji including three other appellants to concurrent prison terms ranging from one and half years to six years. They are convicted of forgery, official misconduct, solicitation, deception, and influencing the witness.

Lhab Dorji is sentenced to a concurrent prison term of five years. He is convicted of eight counts of criminal charges including four counts of forgery, three counts of official misconduct, and one count of execution of document by deception.

His wife, Karma Tshetim Dolma, and former Draagteng Gup Tenzin are sentenced to a concurrent prison term of six years each for forgery, solicitation, and influencing the witness.

And former land surveyor Narayan Dangal is sentenced to a year and six months in prison for aiding and abetting, and official misconduct. However, he can pay in lieu of the prison term.

Karma Tshetim Dolma illegally acquired land at Thumangdra in Nubi Gewog involving other appellants. They were also convicted for the illegal acquisition of another land in Taktse. The ACC registered the case with the Trongsa District Court in 2017 after the OAG dismissed the case saying it did not merit criminal proceedings.