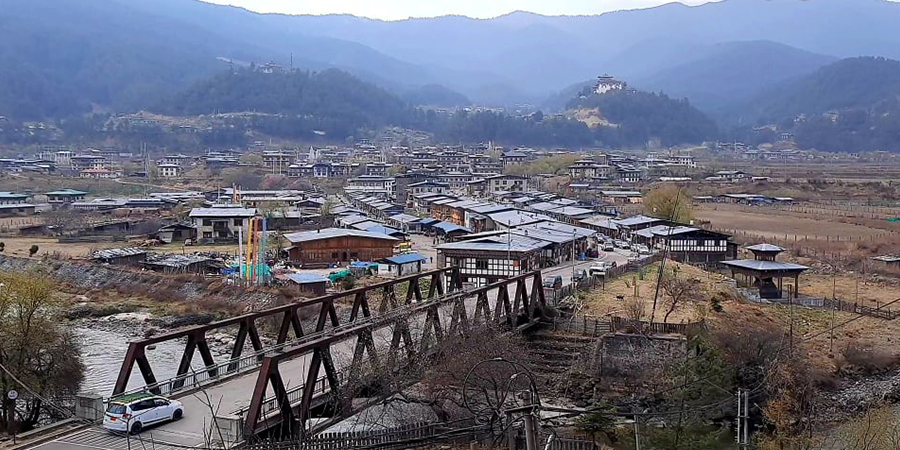 The Bumthang Dzongkhag Administration has recently issued an 18-month notice to the leaseholders in Chamkhar town to relocate their businesses within September next year. The notification asks people to make necessary arrangements to avoid last-minute inconveniences. This has left the residents with divided opinions. Chamkhar town is almost entirely established on state land. 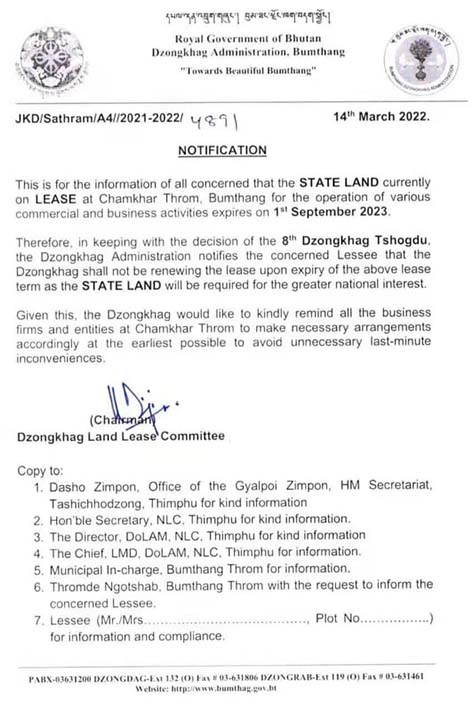 There are 130 leaseholders in Chamkhar town from various districts. All of them were given a 10-year lease in 2011. About half of them were provided newly built semi-permanent structures following the second major fire incident. Their lease term was given a two-year extension last year.

However, a joint inspection by the National Land Commission (NLC) and the Dzongkhag Land and Survey Sector last year found almost 70 per cent of them have violated the lease agreement. Twenty-six of them had partially sub-leased their structures while 58 of them had fully sub-leased, meaning their structures were fully given on rent. Four lessees had even sold their leased plots along with structures. Following the inspection, the NLC instructed the Dzongkhag Land Lease Committee to take action. However, the committee decided not to terminate the lease agreement immediately due to the economic challenges posed by the pandemic. The committee instead decided not to extend the lease term from next year.

The notification has left most of the town residents worried. BBS learnt that some of the lessees would be appealing to the Dzongkhag Administration for a lease term extension. However, most of the people BBS talked to didn’t want to comment on camera. On the other hand, people having landholdings in the new Local Area Plans of Chamkhar, Jalikhar and Dekiling are welcoming the move.

Ugen Sangay, the Bumthang Thromde Ngotshab says the plan is for the benefit of the people. “The leaseholders and residents in Chamkhar town might not appreciate me for supporting the relocation plan but as I am an elected officeholder and a neutral individual, I know how development works have to benefit the people in general,” he said. 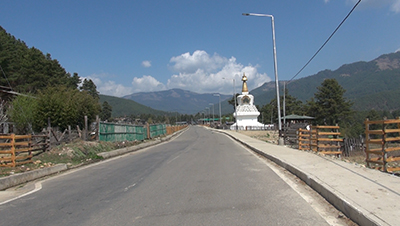 Welcoming the relocation strategy, Sangay, a resident of Chamkhar in Bumthang, says everything will work out if the internal roads are built properly along with drainage and sewerage system. “Regarding the relocation notification, people of Chamkhar are happy about it but the residents in the town may say otherwise. So, we don’t have any say on the matter. We are happy with whatever the authorities decide,” he added.

“The new internal roads will become muddy once the monsoon begins. Likewise, there are marshy areas where Hume Pipes have to be installed. Moreover, it is difficult to get construction raw materials such as sand and stone in Bumthang, so I think it will take some time for the people wanting to relocate,” said Tekpa, a Resident of Dekiling in Bumthang. However, he says the town will look good once they overcome the initial difficulties. 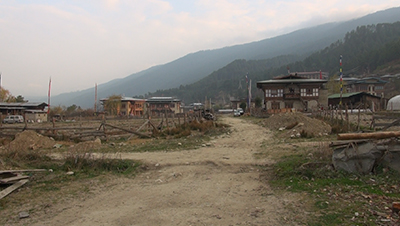 According to the Dzongkhag Administration, about 90 per cent of the internal road construction works are complete and base course laying works at the Chamkhar LAP would begin soon. Blacktopping works on double-lane primary roads with streetlights and footpaths worth more than Nu 250 M from Jalikar to Jambay Lhakhang and Tamzhing are also complete. The administration intends to fast track planning and mapping works for new house construction. Internal road improvement works such as blacktopping, drainage and sewer construction would take place as and when the relocation picks up. A new Nu 263 M water project for Bumthang town under the Water Flagship Programme will be launched in the next few months. The administration also says a meeting with town representatives will be carried out if required. It is aiming at diversifying equal economic opportunities by developing new townships in Jalikhar, Chamkhar and Dekiling Local Area Plans as per the 2015 Bumthang Valley Master Plan.

The existing town area has been identified for the construction of a new municipal office at the 8th Dzongkhag Tshogdu session of the second local government. Besides, an exhibition gallery, police and fire station and an electric vehicle charging facility will also be established along with a children’s park.

Meanwhile, Bumthang is likely to see a construction boom in the next six months or so, adding pressure on resources such as sand, stone and timber. The notification is also expected to fuel land prices on already increasing rates. Currently, a decimal of land in Bumthang town costs about Nu 150,000 on average compared to about Nu 90,000 last year.