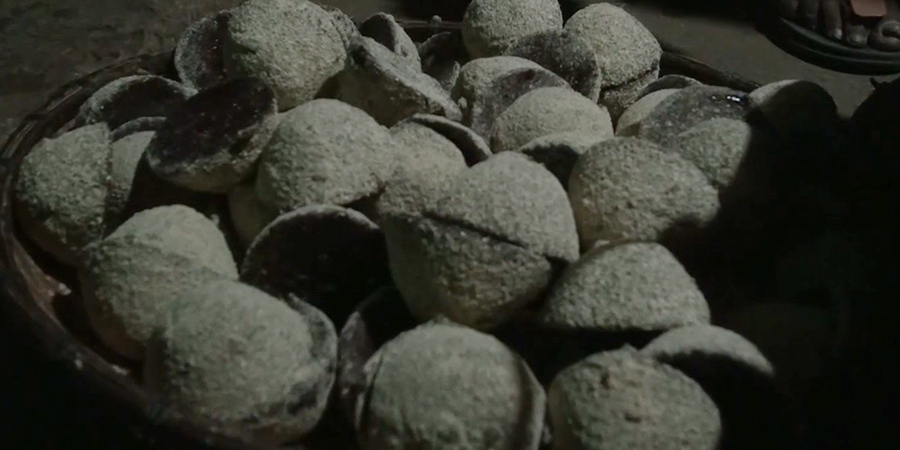 Tshatshi Guram or jaggery from Nanong Gewog in Pema Gatshel is quite popular. For most of the people in Nanong and Tshatshi chiwogs, it is one of their main sources of income. The people have been making jaggery for decades using the laborious traditional method. Jaggery is prepared by boiling raw sugarcane juice till it solidifies.

The farmers collect the sugar canes, the main ingredient of jaggery, from the fields. It is then taken to a makeshift processing unit where the sugarcane is crushed for juice extraction. The farmers use the machine as it’s easier than the traditional method.

“I started cultivating sugar cane when I was sixteen or seventeen years old. It has helped us make some income. Moreover, because of its availability, it’s allowed us to take it as gifts whenever we visit our relatives. And that’s how we have been able to keep this culture alive,” said Cheten, a resident of Zhingri.

“I have seen my father processing jaggery and that’s how I learnt it from seeing him. And since then I haven’t looked back. I make sure I teach the youth too,” said Norbu Wangdi, a resident of Kulung.

The crushed juice is poured into jerry cans and taken home. The juice is then poured into a large pan and stirred continuously with the fire underneath being constantly adjusted. The process is repeated for nearly seven hours. The making of jaggery is a beautifully strategized process that involves tremendous skills.

“We must know the process properly. We have to keep stirring the liquid and do not allow it to become lumpy or burnt. And if we boil beyond its limit, it will become something else. It is considered good when it turns yellow. We have to stir it continuously to free it from the impurities and dust,” said Norbu Wangdi.

“We heard that there is an electric oven but we are yet to receive it. We are told we will be provided with one soon. If it is provided then we don’t have to struggle in the smoke like always. It will also help us reduce the use of firewood as we end up using a lot of it,” said Cheten.

“It is very difficult to cut trees and we don’t have many. We must burn at least three to four logs of firewood to boil a large pan of jaggery. So, if there is an electric oven then it will make a huge difference,” said Norbu Wangdi.

“Tshatshi guram is produced only in our gewog. So, we are interested in this. And we are learning how to process it. While the process is not tiring, it’s the smoke that makes it difficult. We have to stay near the fire for a long time,” said Tashi Tobgay, a youth from Thongshing Gag.

However, the exhausting method of making jaggery has not stopped them from giving up. About a hundred households from the two chiwogs in Nanong Gewog harvest sugarcane to produce jaggery.

“We have been into the jaggery business for decades. However, some people find the process exhausting. But jaggery is the only source of income for us. We don’t grow vegetables here so this is the only way to make an income. That’s why we give our best,” added Norbu Wangdi.

“The sugarcane leaves and its waste after the juice are fed to the cattle. We earn a decent amount. We don’t get customers at once. A few people buy 100 pairs at a time but most of them just take 10 to 15 pairs,” added Cheten.

As per international research, jaggery is known for its health benefits which include its ability to cleanse the body and help in digestion.