Exhibition to inspire young designers to use local materials 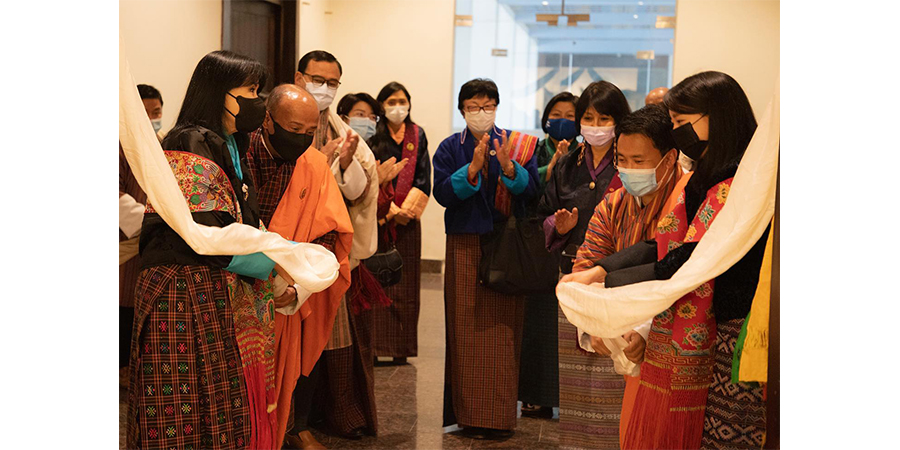 To inspire young Bhutanese designers to see the potential in using the rich materials available within the country, an exhibition is underway at the Royal Textile Academy in Thimphu. The products on display is a work of three years. The exhibition also aims at exploring foreign markets and encouraging youth to take up art for a living. Her Majesty the Queen Mother Sangay Choden Wangchuck and Her Royal Highness Princess Eeuphelma Choden Wangchuck graced the opening on Tuesday.

As a tribute to all the women who have been preserving the art of weaving, the Royal Textile Academy (RTA) and the Agency for Promotion of Indigenous Crafts or APIC organised the exhibition. The exhibition showcases artistic works representing more than 200 artisans within the country. The RTA and APIC received fund support of four million Euros in 2018.

The products consist of rugs, cushion covers, carpets, carry bags and shawls designed for the international market. All the products were developed exclusively from local raw materials and natural dyeing skills. And the products helped women and youth to make a living.

“If we make quality products with authentic Bhutanese materials, there is no question of facing difficulty in exporting. We can export to foreign countries. We made millions exporting the products,” said Lam Kezang Chhoephel, the CEO of the APIC.

According to the Head of Weaving Studio at the RTA, Pema Chhoden, all the products on exhibition are up for sale.

“The primary target is to export but even the local clients can purchase them. We have been part of this project right from its inception. By displaying this here in the local market, it will create awareness on what the local designers can do with the resources available here,” she said.

So far, the country has exported products worth more than Nu 7.8 M to 45 clients from 11 countries including the U.S, Spain and Germany. Such display of art and the income generation is also expected to attract hundreds of youth who are unemployed to take up weaving as a job.