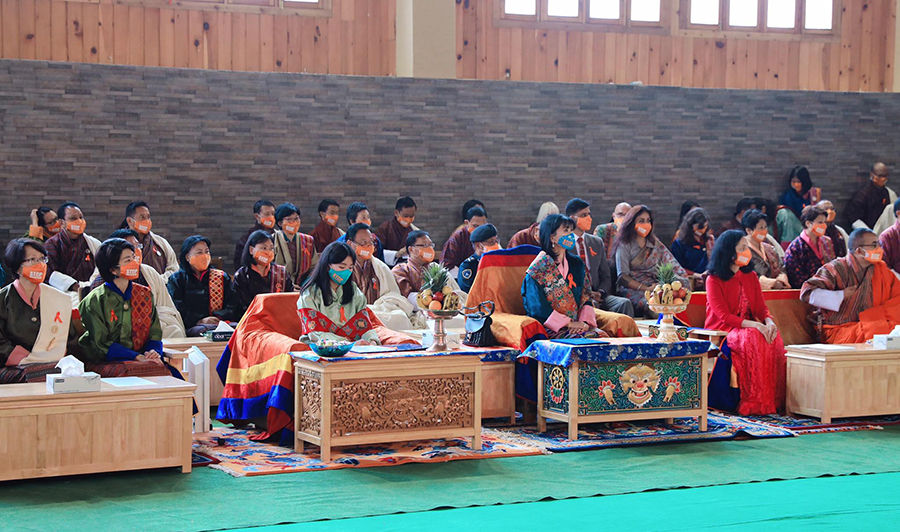 COVID-19 pandemic has led to a surge in domestic violence (DV) cases across the globe. And Bhutan is no exception. As per the Impact Assessment Report of COVID-19 on Women and Children, DV cases in the country increased by almost 37 per cent amid the pandemic.

The report was launched today at the Paro College of Education while observing the International Day of Elimination of Violence Against Women.

Her Majesty the Queen Mother Sangay Choden Wangchuck graced the event. Her Royal Highness Princess Euphelma Choden Wangchuck accompanied Her Majesty. Over the last 20 years, as the United Nations Population Fund Goodwill Ambassador to Bhutan, Her Majesty has been advocating on women’s rights to sexual and reproductive health and to end violence against women. Her Majesty was also honoured by the United Nations as the individual laureate for United Nations Population Award last year. It was in recognition of Her Majesty’s outstanding contribution in raising awareness and devising solutions to population and reproductive health issues.

To fight gender-based violence in Bhutanese homes, Her Majesty launched a series of resources including the Sexual Harassment Prevention Policy. An audio-visual titled We Can Do it! and an e-module on sexuality education and Druk Global Positioning System to trace women facing domestic violence were also launched.

“I was very concerned to learn that the domestic violence rate increased by almost 37 per cent in our own communities. The revelation that our homes are not the safest place for many women and children is not only disturbing, but also highly unacceptable,” Her Majesty said.

As per the impact assessment report, about 70 per cent of Bhutanese adults felt there was an increase in physical violence followed by sexual violence and emotional and economic violence. However, the report revealed that the majority of the victims did not report the cases. According to the National Commission for Women and Children(NCWC), cases go underreported as many perceive reporting domestic violence as a hassle. The Commission developed a mobile phone application to ease reporting of such cases and to enhance the safety of women and children in need of protection. The app was also launched at the event.

“We have been having reported sexual harassment situations currently, there is nothing to be alarmed about. It is actually saying that people are aware and they are now starting to come out and report. And it is through this kind of events we are advocating the people, creating awareness, sensitising them that such laws and legislations are in place,” said Ugyen Tshomo, the Chief Programme Officer with the NCWC.

The event which will be observed for 16 days across the country will see activism against Gender-Based Violence. And will conclude on 10th December coinciding with the International Human Rights Days.