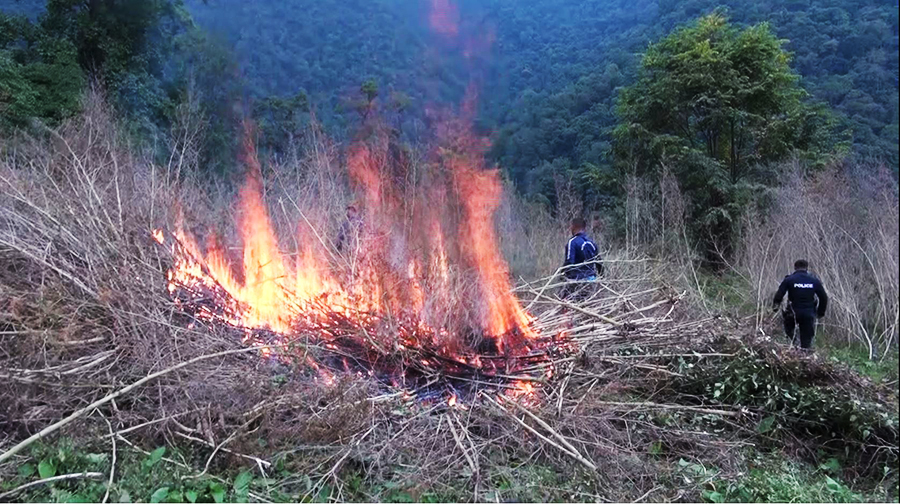 Wungchilo in Trashi Yangtse is a safe haven for abusing and making drugs. As the place is far from the settlement and with plenty of marijuana plants, miscreants visit the place to abuse drugs and make hashish to sell. Police have started patrolling the area to curb illegal activities in the area.

On Saturday, police from Doksum Community Police walked for four hours from the road point to Wungchilo in Jamkhar Gewog. It is the same place where police arrested four men and a minor recently.

And this time too, police spotted two men making hashish. However, seeing the police, the men escaped leaving behind a bag of cannabis leaves, 190 grams of hashish and a mobile phone. The men also left behind their cooking utensils and leftover meals.

The police identified one of the absconded men through the mobile phone left behind. However, they are still at large.

The patrolling team also uprooted the marijuana plants and burned them.

According to a resident of Nyachi village, many strangers go to Wungchilo after parking their cars near his house. To reach Wungchilo, they have to walk from Nyachi. He said some even disguise themselves as forestry officials.

“Last year, I reported about strangers coming at my place to our Tshogpa. I was even threatened by the strangers thereafter. They said they will burn my house down with me if something happens to them. So, I couldn’t do anything,” said Thinley Wangdi, from Nyachi.

He said he lives in fear as there is no house nearby except for his.

Meanwhile, police said they will monitor the area and do sudden patrolling to prevent unlawful activities.