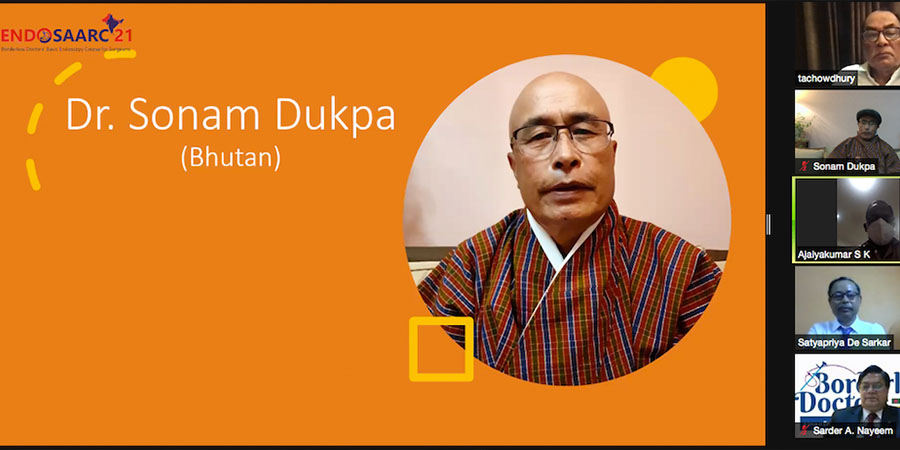 Today, endoscopy and ultrasound have become almost pre-requisite for the diagnosis of most illnesses known to science. And in Bhutan, history will remember the man behind the landmark health facilities. And recognising his contributions to endoscopic services in the country, Borderless Doctors – the group of endoscopic services specialists in the SAARC region recognised his timeless contributions. This story traces the beginning of Dr Sonam Dukpa’s journey as a health professional and his services to the country’s health sector.

If you visit the Menjong Diagnostic Centre in Thimphu, you might not believe that he is 74 years old. At his age, people either stay home or go on pilgrimage, but Dr. Sonam Drukpa is an energy bank. With a degree in MBBS, he started his career as a medical officer at the National Referral Hospital in 1975. Later, after completing fellowships in endoscopy from the US and India, he started the endoscopy and ultrasound services at the hospital.

He said that it was initially difficult to acquire equipment to set up a well-established endoscopic service. However, with the help of the government and the World Health Organisation (WHO), he set up the service in 1987.

“Besides the service, I also started training my colleagues, especially the surgeons. Today, they are doing well,” he said.

Walking his footsteps today, many health professionals are spread across the country – carrying his legacy.

Endoscopy is one of the widely used health services in the country today. And it has immensely contributed to the diagnosis of diseases such as ulcers, erosions, gastritis, and biennial tumours among others.

He was also the first Bhutanese surgeon and among six in the SAARC region to be honoured as SAARC ICON of surgery in 2011 – for his outstanding surgical practices and contributions.

However, he said that his true awards and inspirations are the smiles on the faces of the people he treats.

Dr Sonam Dukpa resigned from the civil service in 2006 but he continues to practice what he loves even today at his diagnostic centre. And if his energy and enthusiasm for his service is anything go by his legacy will live on, for years to come.