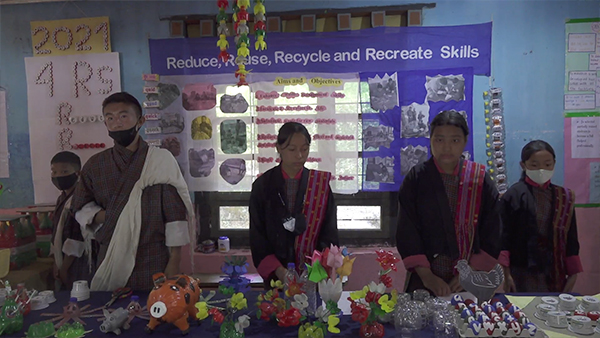 Lhuentse’s “One child, seven skills” policy to groom students with seven skills has been put in motion. It is an initiative started this year to specialise children in skills that can prove valuable later in life. The policy is a part of the education reform decided by the dzongkhag’s education sector during the annual education conference held in March.

As part of the new policy, some of the schools recently demonstrated an exhibition of the skills that the children are learning. In Khoma Lower Secondary School, the students are being equipped with skills in carpentry, culinary, music, ICT, media, hairdressing and cobbling, recycling, and traditional arts and painting.

“I am interested to learn carpentry works, arts and culinary. Of those activities, I am very passionate about cooking,” said Sonam Choki, a student of Khoma LSS.

“In the future, if I don’t get employed, I thought that I could make a livelihood by becoming a web designer. So I started to show interest and explore web designing,” said Tshewang Tempel, another student of Khoma LSS.

Besides their normal classes, the students attend separate classes for the skills.

The one child, seven skills policy was developed based on Howard Gardner’s Theory of multiple intelligences. The theory proposes that there are eight types of intelligence and not just one.

According to the Chief Dzongkhag Education Officer Ugyen Pem, the types of skills offered to students will depend on the schools. However, the aim will be the same which is to help students acquire skills that can help them gain employment in the future as well. “We are already doing it in the form of co-curricular activities. So now what we understood is that simply having skills and simply orienting them on the skill is not sufficient. So we want world-class skills.”

The initiative is in line with the Royal Decree on Education Reform and Civil Service Reform.