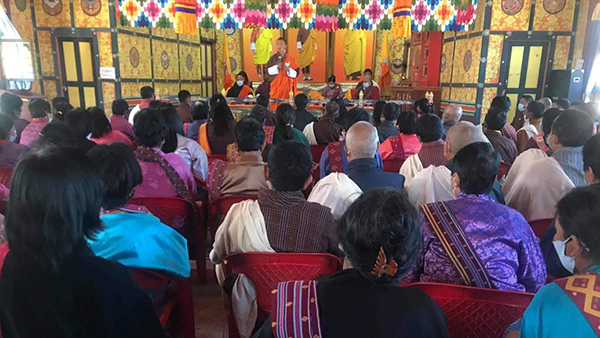 Under the Royal Kidu, His Majesty the King will compensate the families whose paddies were damaged by continuous rain in the last few days. The Prime Minister upon the royal command met with the people of Paro conveying His Majesty’s message. People in 13 districts are affected by the rain.

The continuous rain affected paddy growers across the country. Paro is the hardest hit district with over 900 families affected. According to the reports gathered by the dzongkhag agriculture office, nearly 200 truckloads of rice are damaged in Paro.

“His Majesty is aware and saddened by the news. The pandemic has already caused enough distress and now it is on the crops. But His majesty said that he wont leave any one without compensation. His Majesty’s Zimpoen office will coordinate with the dzongkhag and gewog office for proper assessment. I came here upon His Majesty’s command to share this that His Majesty will compensate through His Majesty’s Kidu program,” said Dr Lotay Tshering, the Prime Minister.

“The country is going through a lot during this difficult time of the pandemic. While we are grateful to His Majesty’s Kidu to us, we would like to say that we would not be able to accept it and would like to request to invest in other things instead,” said Tashi Penjor, a farmer of Tsento Gewog.

“His Majesty has been gracious to provide Kidu to everyone for the past two years. But with today’s situation, the people from Dotey and Shari have decided not to accept the Kidu. However, we will remain grateful for this,” said Sangay, another farmer from Dotey Gewog.

Meanwhile, a proper assessment of the extent of the damage is being carried out.