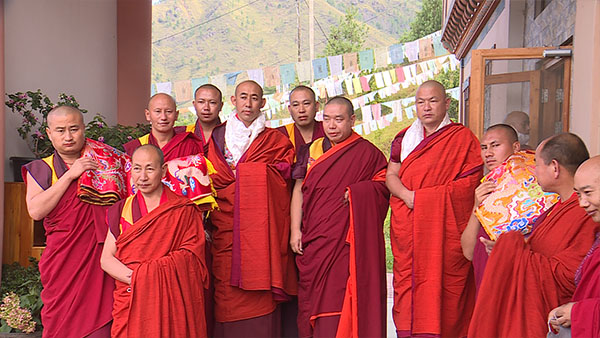 His Holiness the Je Khenpo appointed a new Principal for Rinchenling Shedra in Wangdue Phodrang and a new Lam for the Phuentshogling Zangtopelri in Chhukha today. His Holiness awarded Tashi Lekdhar to the appointees at His Holiness’s residence in Lungtenphu, Thimphu this morning.

Gesar Dorji from Wangdue Phodrang is now the new Principal of the Rinchenling Shedra in Khotokha. The 49-year-old started his monastic education at the age of seven at the Wangdue Phodrang Rabdey and received various Buddhist teachings and empowerment from several religious masters. Prior to his new appointment, he served as Vice-Principal of the same the Shedra for more than 10 years.

Likewise, 40-year-old Thinley is appointed as the new Lam of Phuentshogling Zangtopelri. He joined the Central Monastic Body at the age of eight. He graduated from Tango Dorden Tashithang Buddhist University in Thimphu and completed a three-year retreat from Chari Drubdhey. He was the secretary of the land survey division under Zhung Dratshang before assuming the new post.