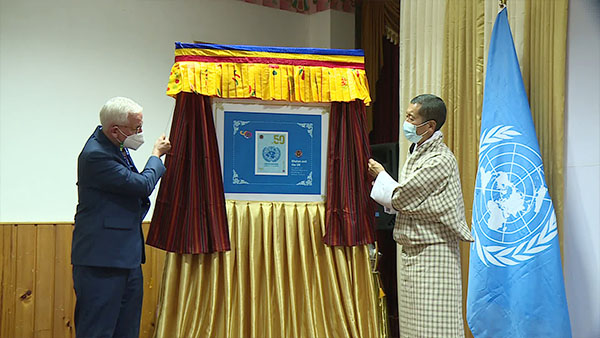 The Prime Minister hosted a reception to mark the 50th anniversary of Bhutan’s membership to the United Nations yesterday. Bhutan formally became the 128th member of the UN in 1971.

The Prime Minister  Dr Lotay Tshering said it was exactly seven months ago, coinciding with the 41st birth anniversary of His Majesty The King that the commemoration of this historic milestone took off at the Memorial Chorten. “It was an auspicious location given Bhutan’s membership to the UN was possible to the perseverance and wisdom of the late Majesty the Third King. I must mention here the support provided by our dear friend, the government of India to help our country realise to join the UN. As we celebrate the 50th year of successful partnership with the UN, and specialised agencies, today my thought went back to where Bhutan would have been in 1971. And how far we have progressed.”

During the historic event, the Prime Minister unveiled a limited-edition commemorative stamp and a coffee-table book called “Reflections and Beyond – The Story of Bhutan and the UN”.

The winners of a national youth essay competition with the theme “50 years of partnership: Bhutan and the UN for a better future” received awards during the reception.