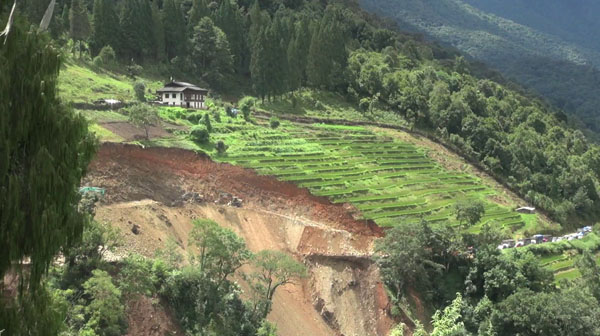 It will take until Tuesday afternoon for the roads department to reopen the Wangdue – Trongsa highway. The road has remained blocked at Khelekha since Saturday. Triggered by incessant rainfall, a landslide washed away a portion of the road. Khelekha is about 27 kilometres from Wangdue Phodrang.

As an immediate solution, the roads department is clearing a bypass near the block site. The office has deployed four excavators for the work. Officials said the landslide washed away around 150 meters of the highway.

“There is no other option than to construct a bypass. It will be about 300 metres long. We could have cleared the bypass in a day if it was a gentle slope. We have to lower its height by 25 to 50 metres; that’s why it is taking longer than expected,” said Karma Tenzin, the Chief Engineer for the DoR Regional Office in Lobesa, Punakha.

The block has left around a hundred vehicles stranded. According to stranded travellers, it is hard to find logistics in the middle of nowhere. “There is one hotel here, but it’s closed. There’s a house, which is locked. Moreover, it’s hot out here, and there are no sheds. My vehicle is filled with butter and cheese smell,” said a traveller.

Some returned to Wangdue Phodrang hoping the blockages would be cleared by the next day. “I came once on Saturday but had to return. I came again yesterday, but it was the same story. And today as well, I think I will have to go back,” said another.

The public bus services along the highway remain suspended for the time being. However, during emergencies, officials allow travellers to get across the block on foot and manage a vehicle from the other side.

“For the last two days, we have been working from 7 AM until it gets dark. We thought of working at night as well, but it is risky. There could be falling boulders or mudslides,” said the chief engineer.

Today, with the border closed due to the pandemic, the highway has become an important route for people travelling between the eastern and the western regions.