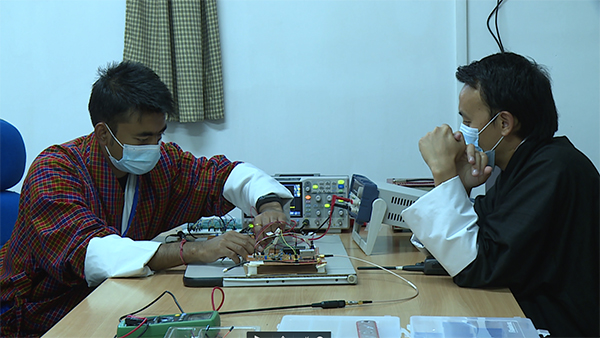 The life span of Bhutan’s first satellite came to an end in November last year. But a team of Bhutanese space engineers is keeping the country’s dream alive; by the end of this year, Bhutan will have a satellite in space again. The team is developing the country’s second satellite. It is a joint project with India. The engineers are working together with the Indian Space Research Organization (ISRO) in Bangalore, India. Currently, the team is in the country developing one of the components of the satellite.

The team of four engineers is currently working on the first model. Space engineer Kiran Kumar Pradhan with the Department of Information Technology and Telecom says the 30-cubic centimetre satellite will weigh around 15 kilograms. It is larger than the country’s first satellite BHUTAN-1 launched in June 2018. BHUTAN-1 was a 10-cubic centimetre CubeSat that weighed a kilogram.

It will be sent into space about 500 kilometres above the earth surface.

Kiran says the CubeSat will make 15 rounds of the earth in 24 hours. It will move over Bhutan at least two to three times a day. The satellite will take images of the earth’s surface and allow wireless communication as it goes around the earth every day.

The ISRO is developing the primary component of the satellite which will have a camera to take images of the earth for remote sensing.

“The primary payload will be an optical camera. It will be capturing images of Bhutan as it moves over the country. And we will be downloading those images. We will be able to use them in various fields like agriculture, forestry or land use mapping and all. At the moment, we are discussing with the agencies how to utilize those images,” he said.

After completing the second model, the team will be returning to ISRO towards the end of September or early October to compile and test the satellite for the final launch.

“Moving forward we also need to do environmental test whereby we will test to see if the payload that we develop will be able to survive the rocket launch environment and the environment of the space because these two environments are very harsh and the electronic components usually find it difficult to survive such environment. So, we put the payload under a series of tests but unfortunately, facilities required to do those tests are not available in Bhutan at the moment,” Kiran added.

Like is the case with all nanosatellites, the lifespan of the country’s second satellite is also expected to be around six months to a year.

In the case of BHUTAN_1, the CubeSat exceeded the designed life and orbited the earth for more than two years.

The team says drawing lessons from the two satellite projects, they should be able to develop a small satellite completely within the country in a couple of years. They say the country needs more space engineers to do that. Kiran and his team believe the opportunities are vast and limitless if young minds are passionate about science and space technology.