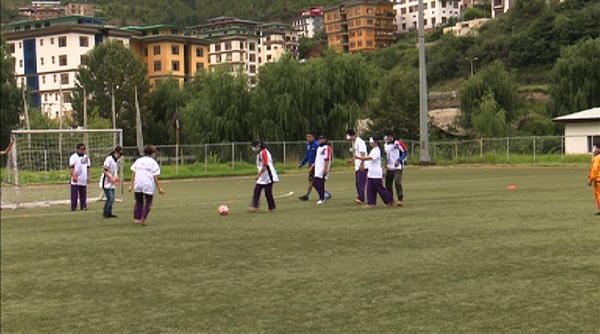 Toe-tapping the ball slowly, Dorji Wangmo gets familiar with having a football around her feet. It is the first time the 24-year-old is trying the sport with professional support.

“I was always interested in football but never got the opportunity.”

It was a challenging sport to pursue being visually impaired, and she never gave it a serious thought.

“I am overjoyed,” says Dorji as she tries to get more consistent with toe-tapping.

On the other side of the pitch is Dorji Nedup. A coach helps him push the ball forward.

“Such sports will help people like us stay physically fit. It will boost our confidence.”

22 individuals who are visually impaired – partially and completely – were introduced to blind football at the stadium on Friday. The Bhutan Paralympic Committee organized the programme in collaboration with the Bhutan Football Federation.

Unlike regular football, in blind football, a ball contains bearings that make a gentle rattling sound when in motion. And this is what helps the players locate it during a game. The players also wear eye patches or shades to provide a level playing field as some players may have a little light or shadow perception.

Today, blind football is a growing sport worldwide with national leagues, regional world championships, and Paralympic competitions. It became an official part of the International Blind Sports Association in 1996.

“We are also planning to introduce other parasports such as goalball, archery, air rifle shooting and swimming.”

The Bhutan Football Federation is also supportive of taking blind football further in the country.

Gekey Zangpo, the Grassroots Football Manager, says the federation will develop the facilities to promote the sport in the country. “We will host blind football tournaments”, he adds.

Meanwhile, back at the pitch, the two-hour event is over. Dorji Wangmo is all smiles.

“If given proper support and guidance, visually impaired people can play football.”