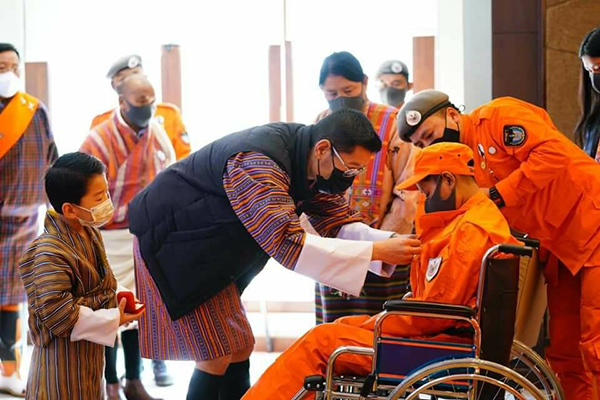 His Majesty The King personally granted Desuup Phub Gyem her Desuung Pins for Druk Thuksey and Service during COVID-19 yesterday.

His Majesty, accompanied by Her Majesty The Gyaltsuen and His Royal Highness The Gyalsey, visited the Desuung Clubhouse where Desuung was commemorating His Majesty’s Birth Anniversary, to meet Desuup Phub Gyem and Desuup Dechen Tshomo.

Desuup Phub Gyem is recovering after having sustained life-threatening injuries last September, when a pick-up truck hit her and Desuup Dechen Tshomo while they were on duty.

Both Desuups were sent to Delhi for treatment on Royal Command. Desuup Dechen returned home after her treatment in October last year, and Desuup Phub Gyem returned home in January 2021, after a series of successful surgeries.

Granting the pins, His Majesty The King said to Desuup Phub Gyem that she has been exceptionally brave and resilient- a true fighter. His Majesty expressed the confidence that she will make a complete recovery. She is receiving physiotherapy treatment to regain full control of her motor abilities.