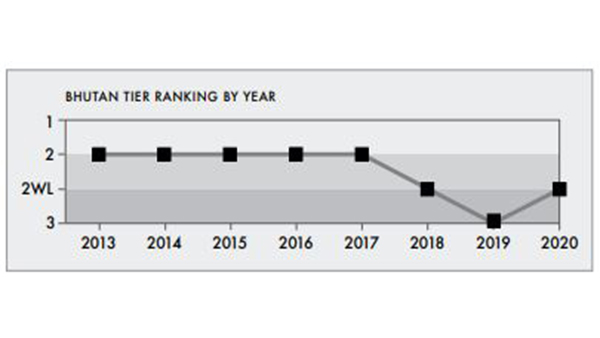 Bhutan is back in the Tier 2 Watch list of the Annual Trafficking in Persons Report. This indicates the country is once again making efforts in fighting trafficking in persons in line with the Trafficking Victims Protection Act of the United States of America. However, it does not meet the minimum standards for elimination of trafficking yet.

The U.S. State Department Office issues the report ranking governments based on their perceived efforts to acknowledge and combat trafficking in persons.

As per the Annual Trafficking in Persons Report, the fall in the last two years, attributed to inconsistencies of local laws with international law and continued dismissal of trafficking charges by Bhutanese courts in cases that met the international definition of trafficking. Also, officials did not identify any trafficking victims during the reporting period. The government did not provide protective services to Bhutanese labour trafficking victims identified abroad, and the government continued to rely on civil society leadership for some anti-trafficking efforts.

However, the latest development of moving to the Tier 2 Watch List means lifting the restrictions imposed earlier as per the Trafficking Victims Protection Act of the United States of America.

An official from the Home and Cultural Affairs ministry said the countries in Tier 3 are normally denied non-humanitarian and non-trade related foreign assistance.

Offtg. Chief of Department of Law and Order Karma Dorji said, “They could also withhold the funding of the government officials or participation in educational and cultural exchange programmes. And also they could ask the international banks such as International Monetary fund to vote against providing loans to that country. In terms of visa also, there are possibilities of US government denying visa to the citizens of countries which fall under Tier 3.”

However, Bhutan enjoyed Presidential Waiver in terms of concessions on certain restrictions while in Tier 3. This was considering the efforts put in by the government against trafficking in persons. From 2007 till now, Bhutan recorded only eight cases of trafficking in persons of which, seven were convicted.

In an effort to incentivise continuous improvement, the U.S. State Department Office limited the number of consecutive years a country could remain on the Tier 2 Watch List to two consecutive years. Should it fail to make improvements, it would be automatically downgraded to Tier 3.

Bhutan is already working towards exiting the Watch List and improve its ranking once again. It is reviewing the provisions of Bhutan Penal Code related to trafficking in persons to ensure they suit the international standards. The Amendment Bill is with the National Council.